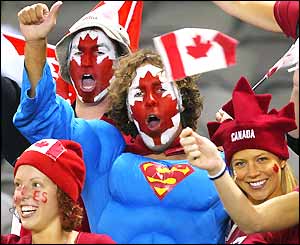 We Canadians are fueled by icons like Don Cherry, who says that Canadian hockey players are the best and have the most heart. But now especially we are seeing more widespread hunger and desire from European players to win the Stanley Cup. I never used to give teams with a European captain a chance in the playoffs until now.
The emergence of Daniel Alfredsson is bringing to the forefront a European's ability to lead a team to the Holy Grail.
But let's face it, the whole concept of Canadian greatness in team leadership, and especially wearing the "C", to a large degree is tainted to begin with. Gloating that only one non-Canadian captain in NHL history has raised the Cup is pointless(Derian Hatcher with the Stars in 1999).
It comes down to percentages. There has always been a larger amount of Canadian players in the NHL. The Canadian content in the NHL was massively abundant pre-1990, and that number has significantly decreased since then. Especially now, you can see the playing field slowly levelling out when it comes to team captaincy.

Here is a breakdown of captaincy and nationality from this season:

That is the most spread out it has ever been.

We still hold the monopoly when it comes to the odds of one of our own meeting Gary Bettman at center ice to accept the Cup based on the above numbers. But that monopoly is fading. Had the Wings beaten the Ducks the theory would have taken a huge hit, with 2 Swedish captains in the Final. It's just a matter of time. Hell, Alfredsson is the first European captain to make an appearance in the Finals in NHL history. He is leading the race for the Conn Smythe trophy right now. A European! A Swede even! Heaven forbid! Times are changing.

Like Jibblescribbits had discussed a couple of weeks back, it takes European players a while to adjust to the North American style of play. Whenever they do, they are terrific all-round players. Look at Alfredsson, Lidstrom and Elias now. They have been around for a lot of years and are great leaders.
As well, if the current obstruction rules remain and the game is built more on speed and skill, there will be a lot more Europeans coming front and center and into the spotlight.

Canadian players are not always the best. There's just been a lot more of us playing in the NHL and for a lot longer period of time.
What I am trying to say is that it's one thing to be a proud Canadian, and to be proud of what Canadian hockey players have accomplished, but it's another thing to have your head buried in the sand.