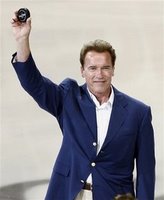 Hilarious to see Arnold Schwarenegger open the show with Ron and Don. Arnie almost sounded like he knew what he was talking about in regards to hockey. He is heading to Canada to talk environment, trade relations, etc, with PM Stephen Harper. Don Cherry pipes up: "Well if Harper gives you a hard time, tell him you know me." Schwarz says: "OK then, give me yo phone numbah!"
At the end, he put a Hockey Night in Canada cap on and gave the "thumbs up". He then ceremoniously dropped the puck at center pre game.

I'm thinking this game could be high scoring, with the Sens winning 5-4.

Not even 2 minutes in, Scott Niedermayer takes a high-sticking penalty, and the Sens capitalize immediately with a PP goal by Mike Fisher.
The Ducks are hitting the Sens all over the ice, but the Sens respond.
At 10:55, Drew Miller pays dividends by hitting a Sens player, causing a turnover. The puck goes right to Selanne who passes it to Andy McDonald and bingo, 1-1. Looks like the Ducks have a new top line.
After the tying goal the Ducks look alive finally, and the Sens are on their heels.
Greg Millen asks: "Do you think these players are nervous since it's their first time in the Finals?" And Harry Neale replies: "Does Dolly Parton sleep on her back?"
Harry, you dirty man. I like it!
The Sens never recovered after the tying goal, and the Ducks outshot them 8-4 through 1.
There is obviously a huge 'feeling out' process here, and it will take a while for these team to really get to know eachother as they have not played eachother for a 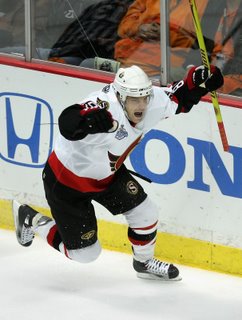 -The Ducks continue their pressure early in the 2nd period, but as soon as Getzlaf took a cross-checking penalty, Wade Redden boomed a shot in from the point while Giguere was trying to find his stick. 2-1 Sens.
-Ottawa is deadly on the PP, and the Ducks are going to have to stop taking so many penalties. They are going to get burned.
The Sens had a massive chance to make this game 3-1 with a 2-man advantage, but failed to capitalize. There are a lot of shots missing the net!
-the pace of the game slowed for the final half of the 2nd. I noticed a lot of Ottawa turnovers. A lot of turnovers were because Anaheim used their size to hit them and force the turnovers.
-there is not a lot of room for the Heatley-Spezza-Alfredsson line. They are being checked well by the Ducks.
-Finals shot total in Period 2: 10-10.
Overall: 18-14 Anaheim.

-You just can't say enough about the shot-blocking skills of Anton Volchenkov. He has blocked 7 shots tonight and 68 total in the playoffs, good for 1st in the NHL.
-Not many chances for the first 6 minutes of the 3rd until Getzlaf charges in on the right side, goes to the backhand, and scores a bit of a softy on Emery. 2-2. We are going to have a great finish here.
-The Ducks have all of the momentum after tying the game again, and the Sens are reeling again. Any time a Sens touches the puck he gets smoked. Even the great Alfredsson coughed the puck up because a Duck bowled him over. Now the Ducks are getting chances with the man advantage as Ottawa is losing their composure.
Shots halfway through the 3rd: 8-3 Ducks. Uh oh..
-With 5 minutes left, Chris Neil and the checking line put out the best Sens shift of the period. Perhaps now the Sens will get some life as the Ducks are playing superb hockey, and shutting the Sens down, neutralizing their speed.
- And now with about 3 minutes left in the 3rd, the Sens are guilty of running around in their own zone and Travis Moen scores the go-ahead goal, a slapper from the slot with a bouncing puck. Wow. The Ducks deserved that though.

-With Emery pulled, the Sens press. But the Ducks pressure the points and keep everything else to the outside. A great checking game by the Ducks. They played the best game I've seen them play in a while.
The Sens looked physically dominated out there and completely outhustled in the 3rd.
Spezza-Heatley-Alfredsson will need to step it up next game.
The Ducks need to take less penalties, but must be happy with their efforts tonight.