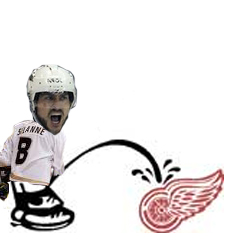 That was close. Too close. But it doesn't matter anymore because the Ducks are moving on to the Finals. The biggest reasons wht they are after this game:
1. Holmstrom missed a golden chance in front of the net after being perfectly set up.
2. JS Giguere made a monstrous glove save with about 4 minutes left.
3. Most importantly, Sammy Pahlsson's goal at 5:54 of the 3rd proved to be the winner. It came 2.5 minutes after Zetterberg had made it 3-1. Huge.
The Ducks were outshot 16-3 in the 3rd. Man oh man this could have gone wrong for Anaheim.

No one wanted to go near the Clarence Campbell Trophy. The Ducks are superstitious, and the Sens aren't. At least the Sens have brains. I don't get the whole superstitious thing.
Love that Ducks team pic thing before leaving the ice however, wouldn't that counteract touching the trophy then? Aren't team photos saved for Cup wins? See what I'm saying? Superstitions are dumb.
What is up with Chelios shaking the Ducks' coaching staff's hands and then skipping the player handshakes at center ice? Well he is over 40. He probably forgot. Chalk it up to Alzheimer's.

The Ducks look like deer in headlights right now, and Datsyuk has scored a PP goal to make it 4-3. Whoa! Moen has just taken a hooking penalty..a phantom call! Chelios had his stick squeezed under his arm! Oh no!

Screw the blowout. Datsyuk tips in a Lidstrom pass on the PP with just under 10 minutes left to play, and this one is far from over once again! I can sense about 100 mood changes from Sleek right now...

Hey! The Ducks do shape up after that goal. Sammus Pahlson scores on the rebound after a 3-way play on the rush. The Wings are cooked now for sure. Visions of golfing dancing through their minds. This could turn into a blowout....

The Ducks had better shape up here. Zetterberg has scored early in the 3rd to make it 3-1. Anaheim iced the puck 3 times before that. This is not a time to go into a slumber and be sloppy.

And the slaughter continues! The Getzlaf-Perry-Penner line capitalized at 9:52 of the 2nd period. Are they ever clicking tonight!
The Wings are not winning any battles for the puck, are not skating hard, and look completely defeated in their own minds. Where did that dominating Wings team go??? They look like 20 Todd Bertuzzi's all on the same team!! Woooha!
Of course, CBC is now questioning Lidstrom's leadership when the Wings are facing elimination and losing, and are asking the questions if this team misses Yzerman and especially Shanahan. Hey guys, fuck off!!! I questioned that at the beginning of the season and the Wings proved me completely wrong. They got this far by playing Mike Babcock's system and with their skill and speed, all of which are completely absent tonight. Not even Shanahan could save this mess.
Getzlaf persisted on a loose puck at 18:33 and made it 3-0 Ducks. Great job by the refs to not prematurely blow that play down.
Shots on goal in period 2: 12-6 Ducks. Overall: 26-13!
Look for the Wings to rebound in the 3rd and for it to be much too late for them to get back in this one. The Ducks D did look a little stupid towards the end of the 2nd though.... but Anaheim starts the 3rd on the PP because of a chincy too-many-men penalty.
Red Wings Death in..........20 minutes!

6:50 PM
The Ducks have come out and played their best 1st period of the series. Chris Pronger's point shot went off Robb Niedermayer's skate and into the net, shorthanded, to make it 1-0. The Ducks outshot the Wings 14-7! Too bad it wasn't 2-0, because you know the Wings are thinking they are fortunate to only be down by 1 after that lop-sided frame.
The Penner-Perry-Getzlaf line is on fire but can't capitalize yet. The Wings look unorganized, but seem to be slowly getting it together.

This game is massive. A win by the Wings tonight and I say they take this series in 7. That is not allowed to happen. Anaheim, you had better shape up. Game 5 was grand larceny performed by the Ducks. The Wings had them right where they wanted them: down 1-0 with 2 minutes to go, until the late goal on the powerplay by Scott Niedermayer. The Wings had outshot the Ducks 37-26 in that one and controlled them all over the ice.
It is going to take a massive effort from JS Giguere again tonight to steal another one. For whatever reason, the Ducks don't look like the better team against these Wings. Detroit is so fast that the Ducks have a hard time containing them without taking too many penalties.
Unfortunately, that could be the difference in this series, and that is why I say that if the Wings take Game 6 they will take Game 7. Bold, but somewhat logical.
Nothing like home ice for Anaheim to hopefully shoot some life into their veins tonight.
Giguere makes himself look huge in net and lets pucks hit him. That seems beneficial for when he is being screened. The Ducks will have to continue keeping the Wings to the outside and let Giguere stop those shots, and then the Ducks need to clear the rebounds. Shit, are you seeing how many rebounds Giguere lets out? I can't even count them.

A few stats for ya

Detroit has outscored the Ducks 14-12 in this series.
Their power play is effective at 7-for 33. The Ducks are 3-for-26. Time for Anaheim to stop taking so many damned penalties.
The Wings have outshot the Ducks 151-142.
I don't know what the times are that each team has been on the attack in the opposing zone, but I'll bet Detroit has the edge with that considerably.