The Demons Have Been Exorcised

Share All sharing options for: The Demons Have Been Exorcised 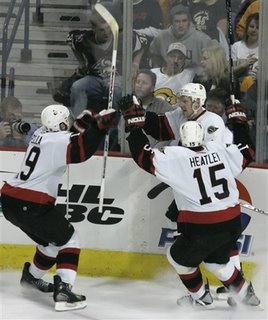 With the utmost of irony, Daniel Alfredsson came into the Sabres zone against 3 defenders down the left side, where he was beat by Jason Pomminville last season to take the brunt of the blame for the series winning goal, and buried a wrister past Ryan Miller to clinch this series in 5 games. Alfredsson had 1 goal and 1 assist and Dany Heatley had 1 goal and 2 assists as the Senators played better and better as the game went along.

Heatley finally had found the net in this series and played superb.

Can you belive Chris Drury? He was wearing the "A" instead of the "C" tonight, but played like a true captain would. That one shift where he blocked 2 Sens shots to preserve a 1-0 lead was beyond words. Unfortunately he took a shot in the head from his own teammate in the 3rd and never returned.

I also feel bad for Ryan Miller. That save on Jason Spezza was a beautiful desperation save. Miller was solid. Can you remember Ray Emery having to be all that great today?

The Sens just keep on rolling. They play with such composure and hardly ever look rattled when things don't go their way. By the time this game went to OT the Sens were at the top of their game and were not to be denied.

Ottawa has finished all 3 teams in their playoff run in 5 games only. The are healthy and ready to go in the Finals. Meanwhile the Ducks and Red Wings are going to kick the crap out of eachother for a while as the Sens get to watch.

The questions will abound now in Buffalo as to why this team could not get past the 3rd round again, especially after dominating in the regular season. Hey, that sounds like what Ottawa had to deal with for the past 6 years or so!