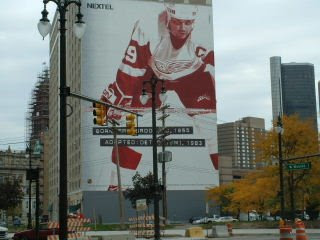 "You don't get picked to be very good, and then you're pretty good through the regular season, and then someone says you're not a playoff team," Mike Babcock said. "We played two big, strong teams and have done well. And now we're going to get another one."

Tell me I'm having a bad dream. Detroit keeps plugging away in these playoffs and surprising people. I hate it. I hate Detroit. Always have, always will.
The Wings seem to be going the route of the Sens, who were also labelled as chokers in the playoffs. These teams seem to be rallying around these accusations and judgements.
There are some intriguing stories surrounding this Wings team.
- Matthieu Schneider, their 2nd best defenceman did not play in Game 6 and may be lost for the rest of the playoffs with a broken wrist/forearm injury. Didn't faze these guys in Game 6.
- Chris Chelios (240) is 7 games away from catching Patrick Roy (247) for the record of most games played in the playoffs. Despite his age, Chelios is still a fit machine of the Gary Roberts variety. These guys don't quit.
- nor does Dominik Hasek, who at 42 is stoning the opponents this post season, proving his age is not a factor.
- I really haven't given Detroit a chance in these playoffs. I thought the losses of Shanahan and Yzerman last summer would be detrimental, and this team would lack leadership. Nope. Go figure, Shanahan's former team goes further in the playoffs than he does.
- Detroit has 7 players of Canadian decent, 2 Russians, 1 Finn, 4 Czechs, 2 Americans, and 6 Swedes on their current roster. Why does that matter? Not saying...
- The elimination of the Sharks means that there is only 1 team left in the playoffs with a Canadian captain: the Ducks' Scott Niedermayer. There are 2 Swedish captains and 1 American captain left besides Niedermayer. Only once has a team that did not have a Canadian captain win a Stanley Cup, which was the Stars in 1999 with the American Derian Hatcher wearing the 'C'. God bless Canada.
-I can't believe that the Sharks couldn't put these guys away. I will underestimate the Wings again in the semi's, as I pick the Ducks to beat these guys in 6, maybe even 5. To me, it doesn't seem like the Wings have had much competition yet in the Sharks and Flames. The Flames couldn't win on the road and the Sharks folded after the Nabokov mistake in Game 5. I still don't think Thornton played all that well either. He floats out there like Bertuzzi does.
- The thought of Todd Bertuzzi getting this deep into the playoffs makes me ill. He is showing a lot more signs of life in Detroit, but isn't putting up the points. He also drifts a lot still. His back checking sucks. In 10 playoff games this year, Bertrude has 1 goal and 3 assists, 10 shots, and is a -1. Sad, really. This jackass is floating his way through the playoffs.
Can't wait for the Wings/Ducks series to start. It should be an aggressive affair. The last time these 2 teams faced eachother in the playoffs was in 2003. The Ducks swept the Wings, riding Giguere's brilliant play in goal. Jiggy only allowed 6 goals in those 4 games, stopping 165 of 171 shots. Shocker. The Ducks went to the Finals that year. Expect the same this year.