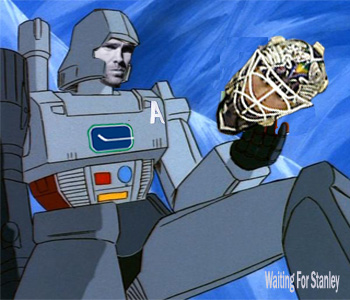 I don't know what inspires me to make such Photoshops sometimes. An overactive imagination on occasion I suppose.

**Update (12:00 PM): From The Vancouver Province: Jeff Cowan was not at practice and may not play tonight. Apparently he is 'banged up.' As well, Kevin Bieksa's problems have alleviated, and he could be available tonight.

**Update (11:55 AM): From The Province- Goaltenders Martin Brodeur of the New Jersey Devils and Roberto Luongo of the Vancouver Canucks and centre Sidney Crosby of the Pittsburgh Penguins are the finalists for the Hart Memorial Trophy as the NHL's most valuable player.

The Canucks' power play woes are front and center now, unlike in the Dallas series. It is so easy to pick on a team's lousy power play when they are behind in a series. But the 'you can't win a series with a sub-par power play' theory has too many holes in it. The Canucks were 3-for-38 against the Stars, and Dallas was 5-for-36 with the man advantage. Yet Vancouver still won the series.
The Canucks are 1-for-20 against the Ducks in Round 2. Anaheim is 4-for-21. This is going to sound silly, but if our PP doesn't improve, we can still limit Anaheim's scoring when they are up a man, and then beat them 5-on-5. Alain Vigneault pointed that out (in a sense) earlier in the series. It is possible. An improved power play would solidify Vancouver's chances however.

I would not mind seeing Brendan Morrison taken off the point on the power play. Morrison looks absolutely lost and defeated out there. I don't give a shit how much he makes per year, I'd like to see him sit on the bench more often to send a message.
The same applies to the Sedins. Where is their game? They look like a bunch of floating pushovers out there. Make them sit if they don't show more determination.
Hell, like I said before, maybe it's time that the players who are playing at the highest level should be rewarded right now, with the man-advantage and 5-on-5. That would be Bulis and Hansen. Perhaps that is impossible as they kill penalties, but I wouldn't mind seeing what those 2 could do 5-on-4.

According to the players today, they plan on shooting the puck more and putting a better screen in front of Giguere. (video footage)
Luon-human

Not Luongod in Game 3. Expect a strong performance for Louie tonight to rebound from his human performance last game. Every time he goes to play the puck I am still going to cringe though. I'd also like to see the Canucks keep the shooting lanes clear of Duck players more effectively tonight. If Kunitz wants to put his ass in Bobby's face, then give him some stick work. Make him pay for it. Push him out of there.

I've got a great feeling about tonight. The power play may or may not click tonight. At least they are working on it. It looked better in Game 3 and was rewarded once. I think we'll see more shots directed at Giguere tonight from more angles...desperation. Vancouver will dump the puck in more and aggressively forecheck. They have to. If I see another game filled with Swedes trying to carry the puck into the Ducks' end and coughing it up, I am going to lose it!

The Canucks respond well with their backs to the wall.

2-1 Canucks. Bulis and Smolinski for Van. Pronger for Anaheim. Anyone else feeling confident?