Share All sharing options for: Random NHL News for Friday 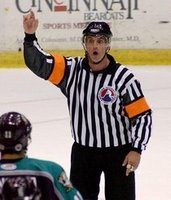 It was not Team Canada captain Shane Doan, but another player who used the "f-----g French" curse on the ice two years ago that has caused an uproar on Parliament Hill, Hockey Canada president Bob Nicholson told MPs yesterday.

Nicholson's statement that Doan has been taking the rap for someone else - who he would not name, but said might not even be a Canadian - prompted Liberal MP Brian Murphy to say he hopes that mystery player is "man enough" to own up to the slur that landed Doan and Hockey Canada brass in hot water on the Hill.

I haven't voiced my opinion on this subject up to this point, and I'm not sure I want to.
OK, I do. Fuck these politicians for making our country look like a joke. Fuck them for making us look like Mystery Alaska in an effort to gain Nationalist votes.
The linesman named Michel Cormier that griped about what he thought he heard during that Coyotes/Habs game in December 2005 is a rat and gutless puke.
Shane Doan receives a hat tip for ignoring all of this hoopla and recording a hat trick in a 6-3 win over Belarus today. Even if he did say "Fucking French- you did a good job", it does not tarnish Team Canada's image having him as a captain. Just the concept of this allegation is atrocious. It doesn't even deserve recognition. Any captain of any team has skeletons in the closet. Maybe Ryan Smyth should never be a Team Canada captain either because he shit his pants when he was 7. (I made that up, relax) To put it in a more serious context, it's the equivalent of Dany Heatley never being a Team canada captian because of the car crash that killed his teammate.
Who do these politicians think they are to judge like that? A bunch of manipulating, shallow, unappreciative, anal jackasses is my answer.
Does the 'culprit' who actually said 'Fucking French" have to 'be a man' and come forward? No! These people need to get over it. But for now you can expect a lot of finger-pointing as this joke continues. Rumors are already starting that it was Ladislav Nagy. Does Nagy even know how to say that, or what a 'Fucking French' is???
Fucking Bloc.
Can you tell I'm still angry from the loss last night?


On to something newsworthy. Lord Stanley has been in Afghanistan for the past few days as has been several Canadian hockey legends and veterans including the likes of Mark Napier, Tiger Williams, and Bob Probert. Today the Legends played a ball hockey game against a group of Canadian soldiers. They called themselves Team Task Force. The final score was 7-1. They probably took it easy on them! For more on the story, check out the Calgary Sun.