Briere to take a discount?

Share All sharing options for: Briere to take a discount? 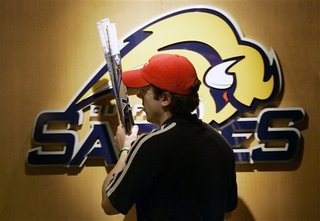 Briere has stated that he wants a long term deal with the Sabres and is willing to be flexible with his salary.

"It’s worth some money to stay here," Briere said. "But what’s fair?" "I don’t feel like I have to max out. It’s not what I’m looking for. I’d like to stay here. This is a place that I’d like to play. It’s a place that I’d like to finish my career. There’s more important things than just money, but at the same time you want to be treated fairly.
I’m open to whatever they’re willing to do and discuss. I think it can work for both sides. The Sabres, if they’re interested, they’re going to have the first chance, and they’re going to have the best chance," Briere said. "If that doesn’t work out, then we’ll start looking at the different options."

Discussions have not yet begun.

"To be honest with you, I have no clue what’s going to happen. There hasn’t been any discussions as far as contracts go with the Sabres, and I didn’t even have any talks with my agent yet about the game plan."


Briere received a raise at $5 million to avoid the free agent market in the summer of 2006. He had 58 points in 48 games in that injury-riddled season of 2005-06. His 1.208 points-per-game ratio that year was a bit better than his 1.17 points-per-game ratio this year. His playoff totals last season were only slightly better than this post season (19 points in 18 playoff games in 2006 and 15 points in 16 games this year).
So what is going to be fair for Briere? Does he deserve a raise?
Don't buy into that 'superstar may be willing to take a cut or accept less pay than what he's really worth to stay with the team he loves' bullshit. The media paints it as an option, and it gets the fans' hopes up. But let's try to be realistic here. Briere, like 99% of NHL'ers is going to go where the money is. Who was the last player to take a cut by choice, Paul Kariya so he could play with Teemu in Colorado?
The keys to Briere's status in Buffalo will hinge on how much the cap limit goes up for next season and how much more Chris Drury is going to want than his current $3 million. But don't look at Drury's 69 points in 77 games this season as the be-all-end-all of his worth. Drury's worth went up in the post season by verbally challenging his teammates in the media and as well blocking shots, saving goals, and taking pucks off the cabbage. Those kind of traits are what got Jay McKee a $4 million contract with the Blues. So it's a balancing act. One or both of these 2 Sabres are going to want the money first and the prolonged success of their current team second. They can talk all that team loyalty bullshit all they want but when it comes down to it, like we saw with the 'ultimate team guy' Ryan Smyth, home is where the damned money is.
Drury and Briere get all the attention lately as they are the team leaders, but Darcy Regier has a lot of work to do. On top of those 2 players, he also has to sign Thomas Vanek, Derek Roy, Adam Mair, Nathan Paetsch, and Andrew Peters. Vanek and Roy due for considerable raises.
You almost have to think that this season was the one big chance for the Sabres win a Cup, as it appears that vital pieces of their core may be dismantled this summer.