Share All sharing options for: Belfour wants a raise 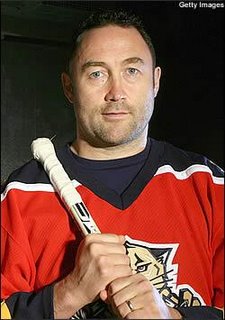 Courtesy of the Miami Herald: Eddie Belfour has addressed the media for the first time since his drunken roughing incident last April in South Beach where he resisted arrest for being drunk and disorderly with teammate Ville Peltonen. Belfour talked business and was completely to-the-point saying that the base salary that Florida paid him for 1 year at $750,000 plus incentives is no longer enough to retain his services for another year.

"I'm definitely a No 1 goalie,'' Belfour said. ``I'm motivated to come back and be the No. 1 guy. I think my health is there. My base was low because I had back surgery,'' Belfour said. ``Throughout my career, my base was a lot higher. . . . I proved that I was durable and I'm not going to play for that kind of money this year, that's for sure. I'll be ready to play and if [coach and general manager] Jacques [Martin] decides he wants to move forward with me -- if we can come to an agreement -- we'll move forward,'' Belfour said. ``If we can't come to an agreement, there will be plenty of other teams we'll entertain and listen to, and I'll definitely be playing.''

The 42-year-old played pretty well for the Panthers down the stretch drive this season and really couldn't get Florida into the playoffs because....well, not even Luongo could get them there, enough said. Belfour keeps in great shape, as his back condition has improved, and would be a valuable asset for any team. But as a starter? This almost officially makes Belfour a pain in the ass, because for one, how much more is he going to want, and two, what team is going to entertain his needs as a starting goaltender if not Florida: Los Angeles? Tampa Bay? Phoenix? Columbus?
By the way, the charges against Eddie on that night last April will be dropped if a plea bargain is completed. The terms of the deal are 20 hours of community service, a $200 contribution to the Police Athletic League and a written apology to the arresting officer. I'm sure his off-ice antics are not going to help his overall case for where he ends up either.
Would you take a chance on this guy if you were one of the above teams?