I still can't believe how the Stars scored goals within the first minute of the first and second periods. How deflating. Poor Roberto Luongo had no chance on either goal as both shots were deflected and went over top of his shoulder. Jeff Halpern and Joel Lundqvist scored the Dallas goals and Stu Barnes had 2 assists. Marty Turco was solid in goal stopping all 35 Canucks shots. Dallas had less shots than Vancouver this time with 27. Most of the Canucks' chances were from the outside as Dallas played a great team game in front of Turco. The Stars played the type of game that the Canucks were supposed to play, but just could not get it done. The 2 Dallas goals were results of broken defensive plays by the Canucks.
Technically, this series could turn into a scenario where the first team that scores wins, as is the case with games 1 and 2.
No powerplay goals last night, but plenty of chances. Canucks went 0-for-6. Dallas was 0-for-7.
The Canucks' PP looked terrible, but it didn't help that the Stars' PK was phenomenal. They were diving in front of shots all night long and had 4 guys in a box in front of Turco.

17-4-2. That is the Canucks' road record since Christmas. I hope we see some of that dominance in Dallas on Sunday.

Jannik Jansen looked awesome out there. He showed veteran composure for a young guy.
Markus Naslund continues to be a physical force and is doing everything he can to lead on the ice. Nice work. 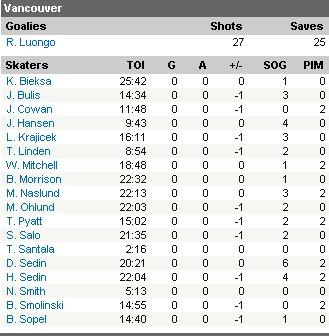