Share All sharing options for: Ryan Smyth unsure of his location come July 1 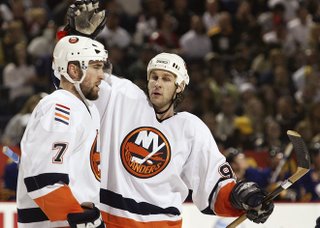 Ryan Smyth has a lot of decisions to make prior to July 1. From Newsday:

Asked if he wants to wait until July 1 to field offers from other teams or if he would consider signing earlier with the Islanders, Smyth shook his head at the thought of the sizable offer he's likely to receive and said, "Well, I'm sure they're not going to make it easy."
To say no, he meant.
"I want to explore this next couple of weeks with my family and my agent. It is a once-in-a-lifetime opportunity. I came from a place where I obviously loved to play in Edmonton, and I came to another historical team that sees the Cup and knows [what it's like to win]. Even those ex-players are still around, so it's nice to see that they keep pulling for the team. It's not going to be an easy decision. That's for sure."

Smyth said he expects to talk with general manager Garth Snow and coach Ted Nolan about the direction of the franchise. They spent yesterday conducting exit interviews and are scheduled to meet with the media today. Blake and goaltender Rick DiPietro said they previously spoke to Smyth about what it's like to live and work on Long Island.

Besides the money, the key will be whether the Islanders can put enough pieces together to improve their chances of contending for the Cup. "There's a lot of great leaders in that locker room," Smyth said. "Ricky's locked in for a long time. You can build a championship team around him. We've had our talks, but I haven't leaned one way or another."

His decisions may adversely affect what fellow UFA Jason Blake does as well. Blake made it known that he admired the Islanders' decision to trade for Smyth at the deadline as it showed commitment to winning.
Of course, I think that the players saying that they want to see a 'commitment to winning' is a cop out. If they were honest, they'd mention that it's mostly about the money, bling bling. Smyth is no exception to that. He may have cried his way out of Edmonton, but it was all about money.
I guess we'll have to wait and see.