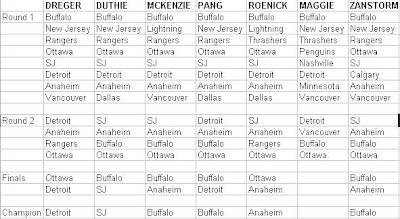 After the first round I am looking like a real smartass. I only got the Flames-Wings series wrong. That was a shot-in-the-dark prediction anyway. Here is how I measure up to the 'experts' on the TSN Panel.

It doesn't really concern me that the Ducks won the regular season series. What concerns me is the Ducks made it to the Semi-finals last season, dropped Lupul and added Pronger in the summer. That is an improvement. Don't get me wrong, I am cheering for the Canucks. But prior to Round 1, I picked a Ducks/Sharks Semi-final this year. I will stand by that and pray I'm wrong for the sake of Vancouver.
Ducks in 6.

The fact that it took the Wings 6 games to beat the Flames is surprising, considering the lackluster play of the Flames. thank Kipper for that. The Sharks disposed of the Preds rather handily and will prove a daunting task for Detroit.
Sharks in 5. Die Wings Die!!!!

Every year I underestimate the Devils. I knew they'd beat the Lightning, but I don't think they'll beat the ready Ottawa Senators. The Sens are rolling right now, and their depth will prove to be too much for the Devils.
Senators in 6

To me, this is the toughest one to predict. The Sabres are heavily favored, but the Rangers have all of their players going as well. It goes the distance.
Sabres in 7.

Pulling names out of my hat for the fluke-factor

Where the hell is the Cinderella team this season? Is it going to be the Devils or Rangers? I wouldn't really call them Cinderella's in the first place, even though the Rangers upsetting the Sabres would be a surprise to most.