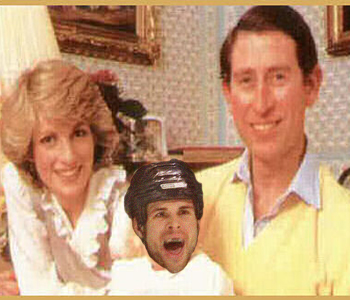 In my opinion, Willie Mitchell could very well be the unsung hero of the Canucks this season, and especially in the post season. The 6'3" 205 pounder has been a steady, tough, and intelligent force for the Canucks. He is a leader. Many times on camera, you can see him hollering instructions to his mates. He is an avid communicator.
The Port McNeill, B.C. native seems to be throughly enjoying his time in Vancouver, and also seems to be playing the best hockey of his career.
So much of what Mitchell does for this team is usually hidden because he is not a flashy player. He is not an offensive defenceman. He has 10 goals and 62 assists in 384 career regular season games. He has 1 goal and 4 assists in 32 career playoff games. But Mitchell will back his goaltender at all costs, as we've especially seen him do this post season, clearing the puck from the goal line more than once.
Mitchell has been great playing against opponent's top lines all season long.
It's crazy to think that merely days after Ed Jovanovski bolted for Phoenix last summer, Dave Nonis acquired Mitchell. I think Mitchell has made most Canuck fans forget all about Jovo. He sure as hell has been a lot more consistent and responsible than Jovo ever was.

Mitchell was drafted by the New Jersey Devils 199th overall in the 8th round in 1996. He only played 18 games for the Devils between 1999-2001.
In March 2001, the Devils traded Mitchell to the Wild for Sean O'Donnell. Mitchell immediately became a Jacques Lemaire favorite, naturally.
In August 2005, the Wild signed RFA Mitchell to a 1-year deal, protecting him from leaving, but not committing longterm.
March 2006, the Wild traded Willie and a 2nd-rounder to the Stars for Martin Skoula and Shawn Belle.
The Stars lost in Round 1 of the playoffs, and allowed Mitchell to go to unrestricted free agency in the summer of 2006.
The Canucks signed him to a 4-year $14 million deal. Considering the style of play that Alain Vigneault was going to introduce here, the Mitchell signing was a brilliant move and has paid off immensely.

Port McNeill is a Canuck-mad town. Those residents, including Mitchell's family, couldn't be happier that he is playing for Vancouver in the playoffs. Willie's mom said recently:

"It's a very Canuck-supportive town. It was tough when he was with the other team [Minnesota]," she said. "It's a dream-come-true to play in the playoffs with the Canucks, a team he's followed all his life."

Mitchell's grandfather, 81, played semi-pro hockey when he was younger, and has only recently hung up his skates. From the Vancouver Sun:

Willie's grandfather, Les, describes himself as one of the biggest Canuck fans around, especially now that his grandson is playing. When he watches games, he wears a special Canuck jersey that reads "Grandpa Number 8," in reference to Willie's jersey number.

Mitchell saves our carcasses against the Stars.

Mitchell gets his 1st goal as a Canuck. Ironically it's against his old team, the Wild.

Willie hands Jarome his own ass.


What kind of face does Mitchell make when a bag of shite like Chris Kunitz sucker punches him behind the referee's back?