Now that I've calmed down, I think the Canucks should be better

Share All sharing options for: Now that I've calmed down, I think the Canucks should be better 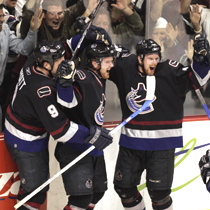 It really should not have gone on that long. The Canucks had a 4-2 lead at 7:36 of the 3rd period when Smolinski capitalized on a fortunate bounce off of the glass. A quick goal by Anti Miettinen less that a minute later seemed to rattle the Canucks, and their focus on tight defence was lost. That was seemingly evident on Ladislav Nagy's tying goal about 5 minutes later. Perhaps Luongo should have had that one, as it trinkled between his arm and body. The Stars outshot the Canucks 16-3 in the 3rd.
I'm not trying to be pessimistic here. I would just like to see the Canucks maintain their composure in the 3rd period at a consistent level. They have had 3rd period meltdowns in the regular season as well. To the Canucks' credit, they didn't take any penalties in the 3rd last night. The Stars caught them 5-on-5. So there is my point. I think we can shut Dallas down when not down a man and keep composure. Composure is a sign of a championship team.
Thankfully, the Canucks have one of the greatest goalies in the NHL bailing them out on occasion when they do lose their composure. I'd rather see no meltdowns, even though Luongo looks up to the task of bailing them out. In my opinion, the last team that won the Stanley Cup with non-stingy team defence was the Colorado Avalanche and Patrick Roy in 2001 and 1996. The rest of the time, the Red Wings, Lightning, Stars, Hurricanes and Devils all won the Cup with tight team D, giving goalies like Osgood, Khabibulin, Belfour, and Ward an easier time between the pipes. Agree?
------------------
Apparently, Jannik Hansen and Nathan Smith have been recalled from Manitoba. That probably means that Cooke and Burrows won't be back for game 2. I wouldn't worry about the new guys though. They may have jitters, but if you've seen the Moose play this year, you can see why the Moose players can step in and do a decent job. I'll miss Burrows' PK abilities for sure.

Someone wasted no time posting the Canucks-Stars game as the 6th longest game in NHL history today, as seen below. 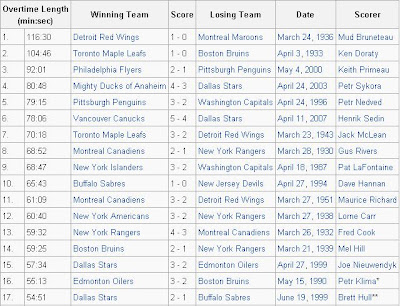 News from Dallas:
-Turco is still under fire, even after his great performance in Game 1. (Dallas News.com) Poor Turc.

-This guy figures that the world suffers too much from A.D.D. and that after 1 or 2 overtimes NHL playoff games should be decided in a shootout. Fuck that!