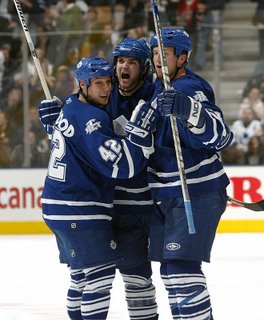 Now that was one messed up game. For a couple of teams that were fighting for a playoff spot, they sure as hell were fragile mentally.
The Leafs came out in the first all guns firing, out shooting the Habs 23 to fricking 9 in the 1st period, and only having a 2-1 lead to show for it. Thank Huet for that.
But then the 2nd period was the extreme opposite. It turned into the Michael Ryder show. As soon as Andrew Raycroft let in a weak one off his glove, the dominant Leafs lost all of their confidence and looked like a bunch of chickens with their heads cut off. Typical Leafs. Where the hell did their defence go? Same place as always..into the shitter.
Ryder had a 2nd-period hat trick in under 5 minutes, helping the Habs go up 5-4, and silencing the ACC crowd. I was so pissed off that I went home and got my Sundin jersey and brought it back to the party. I was going to burn it in disgrace and shame.
But when the Habs got into penalty trouble early in the 3rd, the Leafs capitalized with 2 powerplay goals in the first 3:43 of the final frame. All of a sudden, the Leafs went into a trap-mode that they should have executed all along, and really shut the Habs down.
What a game. It was ludicrous.
The Leafs will all sit down and watch the Islanders/Devils game tomorrow and pray for a Devils win.
Will the Devils play Brodeur? Probably, just to give him the chance to own the wins record and not let Luongo tie him.
Regardless of the outcomes today and tomorrow, do the Leafs or Islanders stand a chance against the Sabres in Round 1?
Can it possibly feel any better that the Leafs burned those motherf**king Habs?! I love it!! Maybe the Habs should have kept Bulis! Maybe someone should have shot Kovalev and Samsonov this season, to put them out of their misery!
Maybe neither one of these teams really deserved to be in the playoffs in the first place. It seems laughable sometimes.