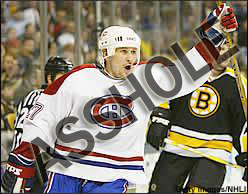 Contrary to Kovalev's mid-season rant about francophone favoritism and the Montreal media, the latest gripe is with the hockey club itself. The 13-year NHL veteran felt abandoned at times during the year, specifically when he was relegated to fourth line duties.

"If you (media) are going to keep embarrassing me here, there's no reason for me to stay because I don't want to ruin my reputation and ruin my career," he said in March. "Sometimes you wonder why anyone would want to be a good player when things like that happen.

What????!!! Sounds like Kovalev is looking for a one-way ticket out of Montreal. Obviously he wants to be treated like Paris Hilton wherever he goes, but his lack of offensive output warranted his treatment by the Habs' coaching staff. Personally I think this moment ruined his reputation. By the way, that interview was with a Russian newspaper. It's funny how Russian players (mostly, it seems) can run their mouth back in the Motherland and think that no one in North America is going to read about it.


Patrick Elias will not play tonight against the Senators. He has an on-going case of the flu. Does anyone think the Devils even have a chance against the Sens regardless? I am looking forward to watching that series.


Would the Islander buy out Alexei Yashin's contract?

Yashin is owed $26.45 million over the next four years, and the buyout would be for two-thirds that amount, which comes to $17.63 million. That amount would then be spread over the salary cap for the next eight years. The economics may simply be too great to pay Yashin that much money to walk away, even though he disappeared in the playoffs with zero points against the Sabres. It will be an interesting summer on Long Island.

The worst contract signing needs to become a thing of the past for the Islanders. Yashin showed signs of improvement during the regular season, but that's not enough. The Islanders need to move on and dispose themselves of that assclown if they want any success in the next 4 years.
Something tells me that we will be saying the same thing about Markus Naslund in the coming weeks. Wait a minute, we already are saying that!

Some great hockey blog reads for today:
Jes Golbez at Hockey Rants has a question answered by Earl Sleek: Why the hell do Duck fans wave ORANGE towels???

Jes also had a video, a very gay video sent to him of Hossa and Demitra. You gotta see it.

Earl Sleek got some shots of Ducks players in the penalty box last night. Too bad they all served their full 2 minutes as the Canucks' PP continues to suck it.

After the game, Sleek was interviewed by Alanah from Canucks and Beyond through the Crazy Canucks Podcast site. Alanah also talked with a somber Mr. Guerrero from the Canucks Hockey Blog afterwards. JJ always puts things into proper perspective though! Sleek sounded like he drank a 40 all to himself! :) Great stuff.

Christie from Behind the Jersey has the latest on the Red Wings' injury woes heading into the San Jose series tonight.
Maybe the San Jose fans in attendance for Games 3&4 should throw toy sharks on the ice to counteract the Wings octopus-hurling. Maybe Shark shit would be a better idea! Every seat in the Tank has a pair of gloves and a bag of shark shit beside it!

Sherry at Scarlett Ice breaks down the Senators and Devils prior to the opening game tonight. It's a thorough preview and worth a look. Go Sens!

The Leafs have signed Boyd Devereaux to a 2-year extension today. Devereaux was a pleasant suprise this season for the Leafs and will fit continue to fit in well. I wonder if he will continue to be the last guy on the depth chart. I think he is better than that.