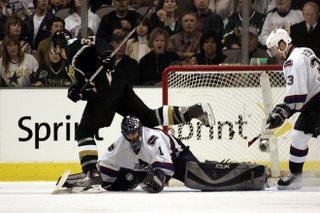 Interference
It appears that the Canucks have made an official complaint to the NHL office about the Stars' rough treatment of Roberto Luongo. At one point in game 3 Luongo was laying on the ice in 'pain' because he was clipped in the head by I believe Ladislav Nagy

."There were a couple of incidents in Vancouver where it was tough for the referees to see Louie getting bumped," Vigneault said. "But obviously, all teams tell their players to go hard to the net, to get foot traffic in front of the goaltender and to drive hard. Louie got hit twice there and once almost got hurt. The league is aware of it. It's something we hope the referees are going to be able to see."

Vigneault may as well bring it to the League's attention because for one, he wants it to stop. Secondly, if it isn't going to stop, at least the referees will, or may be looking for it to happen and make the call.
It's a tough scenario for the refs I'm sure. You want to make the interference call sometimes, but Luongo for one sells it anytime someone touches him. And you know what refs do when a player embelishes often: they stop calling infractions against the player.
I'm not sure if any other team has complained about the same thing this post season. One thing is for sure: it's happening in every series. How about Colby Armstrong's treatment of Ray Emery? Full on contact!
The worst thing in this situation is something that Kevin Bieksa made clear:

"It's tough when you see a guy bumping your goalie. The guys [who have] been bumping our goalie have been their little guys.... So those guys aren't really going to [fight] back. So you give them a shot or something. You have to be very careful. You definitely don't want to take a penalty."

And that's exactly the problem. Players' hands are tied when it comes to policing their teammates. If Nagy does that to Luongo, we need to see Bieksa rough him up (or beat his ass in) to send a message: "We are not going to tolerate this bullshit you little weasel!" Alas, we're stuck with this problem because of stupid NHL rules.

What about tonight?
It doesn't look like Eric Lindros is ready yet.
I don't mind. I wouldn't want him to play in this series at all.
A huge positive about Vancouver in game 3 was that they were mostly outplayed for the first 47 minutes of the game. Not only did they erase a 1-0 lead when it seemed liked they wouldn't, they also took over the game after they tied it.
Roberto Luongo is looking better and better all the time. He saved their sorry carcasses again last game. It seems that the only way that Dallas is going to beat him now is with a tipped shot from the point or a through a massive screen. Luongo's mates will need to continue their tight play in front of him and keep Dallas to the outside and clear those rebounds.

My call
I think Canucks will take this game 2-1. I would be more tempted to pick Dallas if Temujin didn't steal my 2-1 Dallas score last week. haha! Anyone else?
Expect a ton of shots from the point with heavy traffic in front of Luongo. Hopefully the Canucks give Turco the same treatment on a more consistent basis tonight. This one should be even more of a defensive clinic, as both teams are settling down as the series goes on.
Can you imagine going home up 3 games to 1? I'm in! Let's get it done, boys!!

**UPDATE**
Marty Turco had lunch at the May Dragon Chinese Food Restaurant today for a hefty lunch. After devouring his chicken balls and deep-fried prawns, the waiter brought him his bill and a fortune cookie. Upon breaking his cookie and pulling out the fortune, here is what he saw: 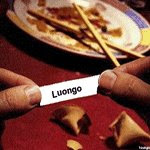 
**UPDATE 2**
I see that fellow Canuck fan Rod Templeton has a post up about what Dallas Stars fans are saying in response to the Nagy-Luongo issue in a blog at The Dallas Morning News site. No love there.
I can see the Canucks being more concerned in this situation because if we lose Louie, we be fuckt, (sorry Sabs). The Stars have an awesome backup in Mike Smith.

Thanks to 1uongo from the Vancouver Canucks message boards, whose sig I stole!