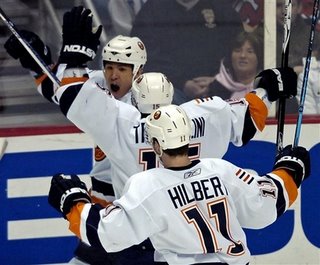 It's all Islanders so far. They are pressing hard, and the Devils look very uncoordinated.
Richard Park bags the first one after a scramble in front of the net. The 2nd goal for Park in his last 2 games. Why couldn't he still be a Canuck?
I don't like Lamoriello's decision to start Clemmenson in goal. It's a big fuck-you to Toronto, and maybe that is his point. There is no love between Toronto and New Jersey....at all.

7:30 2nd Period
Same same. The Devils have generated nothing at all so far. The Islanders are fighting for their lives. No knocking Clemmenson though. He is holding a lifeless team in it. One more goal by the Isles and it's pretty much over.
Isles goalie Wade Dubielewicz looks like he's going to post a shutout.
Where the hell is John Maclean and Claude Lemieux when you need them?

Brodeur's response to not playing tonight:

"We went from playing half a game, one period, two periods, the whole game, not playing," said Brodeur, referring to a conversation he had with Lamoriello pregame. "We went through everything, and I think this is the right thing to do."

As far as the backlash from the Leafs for not playing, Brodeur said:

"I've got to put it out of my mind. I am going to make the best out of this week to get myself better preparation and be injury free and be free of the workload. You get calls from everybody. You can't please. Hopefully we'll win and I won't have to deal with this."

13:30 3rd period
NOW the Devils are playing with more effort. But they can't beat Dubie.

3:00 (3rd)
Well, the Devils are making a game out of it. John Madden deflects one in. At least we get a good finish here!
Will Park get an empty netter?

1:34 (3rd)
The Devils are pressing now, and the Islanders look stressed.

1:17
Devils call a time out. Lou says nothing. The assistant coach does the talking.
Play resumes, Clemmenson is on the bench. Brendan Witt blocks a point shot, puck goes out of play.
Devils keep pressing, Ryan Smyth blocks a shot! 36.6 seconds left and Gomez goes in offside. There are 3 Islanders laying in front of every point shot.
Devils tie it with 1 second left!!! Holy shit!!! Or did they???
.9 seconds left on the clock!!! We are going to OT!!!I don't fucking believe it!!
John Madden is the new John Maclean!

OT
I can't believe this is happening.
The Isles are shaking it off and pressing. But both teams are. At least the Devils are finally inspired.
Clemmenson stones Satan with 2.5 minutes left. Is this going to a shootout??
Ryan Smyth is an animal by the way. He's pouring his heart out, laying in front of shots, giving his left testicle.
Oh shit. A hooking call on Madden, who hooked MA Bergeron. There's only 30 seconds left. Oh boy.
Phew. The Devils kill the clock, and we are going to a shootout.
Can you imagine the Leaf players right now? They're all drinking I'll bet.

Shootout
Dubie has Yoda on his mask. May the force not be with him.
Lou and the Devils are laughing about something on the bench.
Satan- scores over Clemmenson's right pad.
Parise-woa sweet moves and makes Dubie look silly
Kozlov-5-hole goal!....
Gionta-poke check by Dubie!
Smyth- uh-oh....stopped by Clemmenson!
Brylin- poke check again by Dubie! It's over!!!

What a great set of poke checks by the Islanders goalie. Man oh man.