Well, this loss didn't hurt as much as the Game 5 loss in OT. The biggest reason for me personally is because the Canucks were never really in this one. Dallas maintained their momentum in this series by beating the Canucks physically, offensively and defensively. They moved the puck well where the Canucks didn't. They forechecked hard and kept the Canucks in their own zone for most of the night.
Vancouver stabbed themselves in the foot early in the game by taking 2 consecutive penalties, allowing Dallas to score a PP goal (Modano) with the 2-man advantage. Mattias Ohlund coughed the puck up in the 3rd leading to a Jeff Halpern killer goal.
Chalk it up as an off night for Vancouver. An off-night that may cost them the series.
For now, we can console ourselves with the fact that we still have home-ice advantage, and that you KNOW the Canucks will come out better in Game 7. They have to. As well, there is a small chance that both Sergei Zubov and Brendan Morrow may not play in Game 7. God, that would be sweet.
What is concerning me is that it seems like an eternity since they scored their last goal. It seems that none of the lines are clicking, due mostly to the fact that Dallas is shutting them down.

1. Marty Turkey. Yeah all you Dallas fans. You aren't crucifying your goalie any more are you? Fuckers.
2. Mike Modano. Game winning goal.
3. Luongo. Poor Louie, getting no support at all. He must be ready to strangle someone.

How lousy is Brendan Morrison lately? He is a waste of space out there.

Hey Ohlund, that was the best pass you made all night...right onto Halpern's stick...tape-to-tape. You mindless tit! 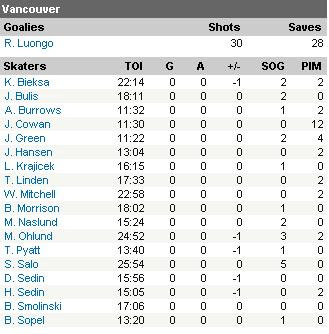