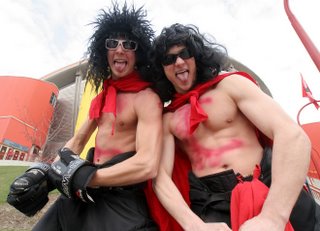 What the hell. Since I have my laptop and the Flames/Wings game in front of me, I may as well do a live period-by-period report about it. I don't really like the Flames at all, but I am hoping that somehow they can force this series to 7 games and knock the piece of dung Red Wings out of the playoffs. I do, after all, hate Detroit, and don't mind seeing any or all of the Canadian teams advance. As long as it's not at the Canucks' expense!

-All this talk about "Ooo, Hasek hasn't played back-to-back games, blah blah." Give me a break. It means absolutely nothing!
-The team that scores first in this series has won every game.
-As usual, the Flames come out firing at home and are physically dominant. Regardless, the Wings are keeping their composure, and badly outshooting the Flames.
-Over half way through the 1st , Giordano took a Matthieu Schnieder slapper in the head. He was bleeding pretty good, but he got up after a couple of minutes.
-2:45 left and Daymond Langkow takes a stupid tripping penalty. Uh-oh. I smell a goal... 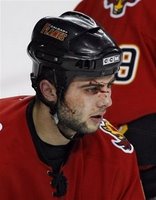 -Nope. Kipper sells it when Holmstrom bumps him and the refs bite. As soon as the 4-on-4 ends, the Flames press hard on the PP and can't beat Hasek. That was basically the first bit of sustained pressure by the Flames in the 1st period.

-In Calgary, they have a captain that comes through for them. 4 minutes in, Iginla wrists a shot through traffic and past Hasek. There's the first goal! Now let's see if the Flames can handle the upcoming Detroit onslaught.
-Actually, the Wings give up 2 odd man rushes and it's Calgary that presses after scoring. Too bad they couldn't bury their 3-on-1 chance.
-Moments later, they have another 3-on-1 in close and Hasek saves the day in Hasekian fashion. Wow, the Wings are falling apart! 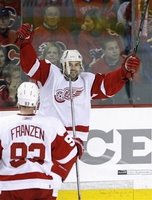 -You know, I still don't understand all the Kipper-bashing I hear. He's been terrific. He just has a team that hangs him out to dry on many occasions. Tonight he is the difference so far.
-At 16:54, Robert Lang takes a chippy pass from Bertuzzi, charges in and blasts a shot past Kipper. Well, that wasn't pretty. Maybe I should take my Kipper comments back.... Now the Wings have the momentum. Kipper stops a breakaway chance moments later. Jeeziz!

-There are not a lot of penalties in this game, almost suprisingly, considering the end of Game 5. Only 1 penalty apiece.
-It seems like there is a lot of nervous anxiety at the Saddledome right now. Both teams are being cautious throughout the first half of the 3rd.
-Under 5 minutes left and the game opens up. Hasek makes about 3 glorious stops and then Chris "Geezer" Chelios breaks in alone on Kipper on a broken 2-on-1 and can't beat Kipper. Wow and WTF???
-To quote Temujin, who's watching the game with me, "the stench of feces is rising in the Saddledome as the thousands of Flames fans just crapped their pants." This of course relating to Daniel Cleary hitting the post with 1:16 left in the 3rd. The Flames are on their heels as this game goes into OT.
-I just don't want to see Bertuzzi bag the winner. Please God no!!!!!

-Bertuzzi takes a penalty right away. Oh, could he please be the goat? Nope. No dice.
-You get the feeling that Calgary isn't going to win this one. It would be a travesty if they didn't considering the shots on goal and their dominance.
-Oh boy. Conroy just high sticked Holmstrom and gets a double minor for it.
-Matt N, you must be sweating right now.....
-Hamrlik just saved the day by clearing the puck out of the crease. Hanzen Franzen almost tapped that in. Moments later Kipper stones Zetterberg and saves the day again.
-The shots are 50-18 right now. Double minor is over. Conroy, you better bag one.
-Enough interference on Iginla already. Lang gets a penalty. Flames' PP sucks until Moss has a wide open net to shoot at and puts it over the net!!!

-The Flames are just hanging on here. I don't think I've ever seen anything like it before: such a one-sided game that goes at least 2 overtimes.
-And there it is! Johan "Fuckface" Franzen scores the winner over Kipper's arm only a few minutes in. What a bullet. Chants of 'Kipper' arise after the shock lifts from the fans.

That's it folks. The Flames had no reason being in it anyway.
Final shots: 55-21. Fire the damned coach!