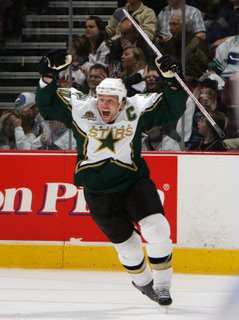 Depressing. And it's spelled M-o-r-r-o-w. How much closer can this series get? OK, don't answer that, because I don't want to know the answer. Brendan Morrow tipped a Sergei Zubov shot past Roberto Luongo at the 6:22 mark in overtime to become the new hero of the series, and keep Dallas in it.
What a game. What a series. All around this slugfest are teams annihilating other teams in 5 games, but the Canucks just couldn't quite get it done tonight. It took a Too Many Men penalty against Vancouver to give Dallas the slight advantage to score the winner.

The look on the Canucks and their fans' faces told the story. Now reality stares us in the face. The Dallas Stars, their fans, and the Dallas media-who gave the Stars no hope in this series- are going to change their tune now, and we will have to bear it all until Saturday.
When you lose 1-0 in such a close game you can over-analyze what the Canucks did wrong. But I'm not going to do that. I can bag on Smolinski, Dan Sedin and Hansen for missing their golden opportunities, but I won't.
The difference tonight was Marty Turco, who has answered all of his critics now and has given Dallas another chance in this series. I admire what he said post game: "I just needed a hero to back me up." No kidding. In sportsmanship, I tip my hat to him.
No doubt about it, Dallas has taken the momentum now, and in my opinion is probably favored to win Game 6 to push this to 7 games.
Let's just pray to the mighty Vancouver hockey gods that doesn't happen.

1. Marty Turco. Still down 1 game in the series with arguably the best numbers out of all goaltenders.
2. Roberto Luongo. What a travesty for him to have to lose this one. Louie played his heart out.
3. Brendan Morrow. The Stars captain played exactly like a captain should.

I give kudos to Jan Bulis, Jannik Hansen, Willie Mitchell and Luongo. Those 2 guys played their damned hearts out tonight.

Mike Modano was given more room tonight and looked a lot better out there.
Eric Lindros generated chances, and unfortunately will only get better the more he plays.

Am I the only one who is happy as shit to see Crosby and the Penguins out of the playoffs? Does Ottawa look like the real deal or what?

Every Western Conference team should be concerned about having to face the Ducks. 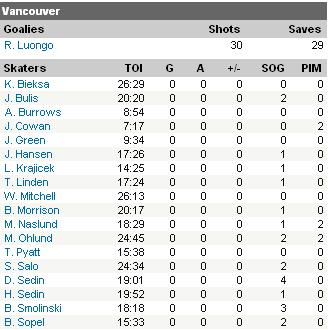