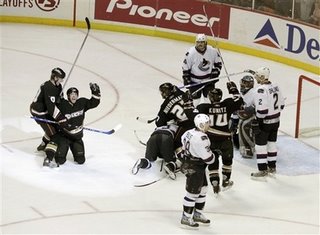 It took the Ducks about 10 minutes to come out of their slumber from an extended lay-off between series. In the first 10 minutes Jeff Cowan scored to put the Canucks up 1-0 while the Ducks coughed the puck up and looked flat. But Vancouver got a good look at how good Anaheim's powerplay was when they took their first penalty- too many men- and Andy McDonald scored his first of 3 goals on the night at 9:24.
It was at that point that the Ducks took over the game. Their speed and skill game caught the Canucks off guard. Suddenly, the Canucks were pinching too deep and getting caught, and not taking their defensive assignments. It resulted in 2 more first period goals: a quick backhander by Selanne, who went through Sopel, and a breakaway goal by McDonald..again.
From the 2nd period on, the Ducks outshot the Canucks 28-18 scored 2 more goals in the 3rd and really shut them down.
The 2 powerplay goals Vancouver scored in Game 7 against the Stars are all but a faded memory. They were 0-for-7 tonight. The Ducks were 2-for-9. Their PP is to be feared. Ours isn't....yet anyways. It will have to come soon for us to have a bloody chance in this series.
I am starting to think that the Canucks are going to have to score at least 3 goals each game to give themselves a chance to win. This isn't Dallas anymore. The Ducks are going to be harder to contain. But Vancouver did shut down Modano and Lehtinen pretty well in Round 1. The same will have to happen against Selanne, McDonald, and Kunitz. And then Perry, Getzlaf, Penner, etc. Christ the Ducks are deep.
Chalk game 1 up as a poor effort. Adjustments will be made. We need to clog up the neutral zone better and skate harder. Turn this into a grudge match. We can't match them speed-for-speed.

It was sobering to see Luongo get pulled. He got hung out to dry tonight.
Markus Naslund is a $6 million 4th-liner.
Why wasn't Jannik Hansen in the lineup?
The losses of Bieksa and Salo hurts. But no damned excuses!
The Burrows/Selanne matchup looks to be heating up already.
Hey Sleek, who was that blonde sitting next to you? Also, I seen you waving 2 towels at the end, you scoundrel!

McDonald's and Kunitz's three points in the first period tied a Ducks' record for points in a frame in the playoffs. Selanne had a goal and two assists in the second period last year against Colorado. Kunitz notched a career best with three assists and set the team playing record by recording them in one period. ... Along with not getting time off since eliminating Dallas, the Canucks came off a series when they played three overtime games -- a total of 92:15 extra minutes.

Note the part in italics. What's the point? May as well throw the towel in then. They aren't going to get any rest against the Ducks. Seriously though, a long 7-game series in the First Round will not be a good excuse to stink it up in Round 2. I hate hearing that lame excuse.
Scoresheet (NHL.com) 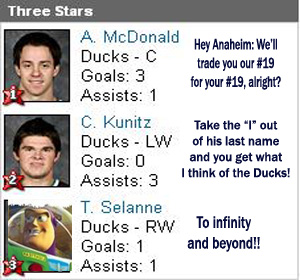 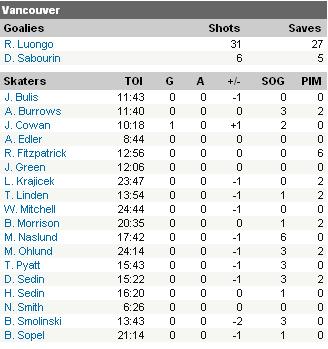