Share All sharing options for: Columbus GM Doug Maclean gets the Axe 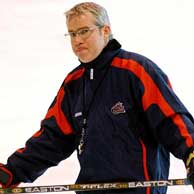 The Blue Jackets were 172-258-62 all-time under Doug MacLean, and are the only NHL franchise to have never reached the post-season.
MacLean was named general manager of the Blue Jackets on February 11, 1998 and was named president a month later. He also coached the team from January 7, 2003 through January 1, 2004. He is the only president and general manager in the history of the franchise.

Patience finally ran out on Maclean as the Jackets have never finished higher than 11th in the West since they entered the NHL. That just won't cut it when you compare the success of the Wild, Thrashers, the rebuilding of the Penguins, all during Maclean's tenure as the Jackets' GM.

-Maclean drafted Nicolai Zherdev 4th overall in the 2003 draft and Rick Nash 1st overall in the 2002 draft. Too bad that those 2 guys, especially Zherdev, have turned in to injury-prone culls.
-Take a look at the other picks he's made on draft day. Not many materialized into NHL-ers.
-Chalk up the hefty priced signing of Adam Foote in 2005 as a failure due to Foote's continuous injury problems.
-The Fedorov trade. This one is the worst in hindsight. The Jackets traded Tyler Wright and Francois Beauchemin to the Ducks for the gutless wonder. Fedorov has put up his worst career numbers in his 2 seasons with Columbus, scoring 55 points in 135 games. Beauchemin is a top 2 defenceman.
-Anson Carter. Maclean put out the dough to take Carter off of Vancouver's hands, but he forgot to think about the fact that Carter was playing with a pair of career-enhancing Swedes. Carter flounders in Columbus.

Now, who will succeed Maclean as the new GM? Anyone think Pat Quinn has a shot?