The Class of Sakic

Share All sharing options for: The Class of Sakic 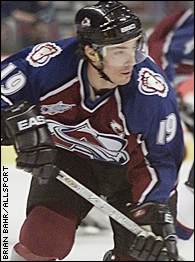 Joe Sakic has signed on for a 19th NHL season with the Colorado Avalanche franchise, signing a US$6.75-million, one-year deal for 2007-08.

"I was really impressed with the way this team came together and am looking forward to next year," Sakic said in a statement. "To witness the growth of our young players and see how they performed with some of our other veterans was very encouraging and says a lot about the expectations we'll have for next season."


I am all caught up in the post season hoopla, but I just wanted to say that Joe Sakic is an amazing class act. His dedication to the organization that he has been with his whole career shows just how much of a loyal leader that he is.
The soft-spoken and much-respected Avalanche captain will remain in Colorado until he retires.
At 37-years of age, Sakic has only lost little of his speed and skill. Is he really going to retire after next season? He still has so much left in the tank, as his 100 point-plus season has proven.
Only Joe knows.
Despite the fact he plays for the enemy, and has been a career Canuck killer (right Corey Hirsch?), Sakic is, and always will be respected by British Columbians.
Now Joe, is there any way we can talk you into playing in Vancouver after next season? Please?

Gotta love him when he plays for Canada!

This is a pretty good Sakic compilation.

Here is how Sakic clinches a Cup win in Game 7 and then shows his true class afterward.