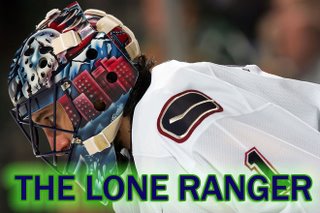 "We'll find out if momentum matters," said Marty Turco, who didn't have a playoff shutout before this series. "We've frustrated them a little bit. Game 7 will be the biggest challenge."

Can you believe it? It was a mere 4 days ago that we were saying that about them.

"If it weren't for Roberto, it would have been 7-0. It was not a good game on our part to say the least," Canucks coach Alain Vigneault said. "As far as I'm concerned there was one team on the ice. It was the Dallas Stars. They outworked us, outhustled us. ... If we bring this type of game or efficiency on the ice. I don't like our chances.".

Bank on the Canucks coming out hard on Monday. If they can play hard and stay out of the fucking penalty box, we'll be ok. A powerplay goal for Vancouver at a key time would be nice as well.

"That just comes down to mindset," Brendan Morrison said, "getting bodies willing to pay the price, take some punishment, engaging in some battles. That's obviously what we're going to have to do to score some goals."

What, you just realized that Mo? It's amazing how a team can forget the reasons it was successful in the first place all in one game. But that is why you credit the Stars' defensive effort. Hey, we've been doing that to teams all damned year! Time to suck this up and lay it all on the line on Monday. And Morrison, you had better not suck like you did in Game 6.

I hate being the bearer of bad news, but according to Rotowire, Sergei Zubov (torso) and Brendan Morrow (knee) are expected to play on Monday.

The slash by Burrows on Morrow is under review by the NHL.