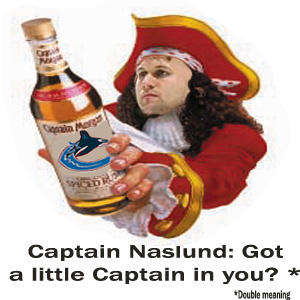 If you weren't a drinker before, maybe you should become one now. In fact, become a full-fledged alcoholic for one night (drink responsibly-haha). Tonight's finale is going to bring about more stress and anxiety than an Alec Baldwin phone call to his kid.
The Stars are riding high after winning 2 in a row to tie the series. After Game 6 the Canucks look like a heavyweight champion boxer up against the ropes getting fed by a suprising challenger. Thankfully, the fucking bell just sounded to end the round.
Now the Canucks are going to have to look deep within themselves to see if they can shake off this Stars attack and put the current inability to close this series and a lousy Game 6 out of their minds.
All I am asking for is composure, patience, and desire. No more mindless penalties, play their system that has worked all year, and match/exceed the Stars' work ethic.
The rest comes down to breaks that are created by such ethics.

Markus Naslund- prove you are worthy of wearing the "C" on your jersey (and your $6 million salary) and play the game of your life. Naslund guaranteed at practice on Sunday that the Canucks will show a better effort in Game 7.

"We're looking to bounce back and play a strong game," said Naslund. "I can guarantee you we are going to play a hard game. When we have our backs against the wall we usually respond well."


Remember how most of us said in the beginning of the season that the Canucks would have a hard time scoring goals and the team proved us wrong during the season? Well that will not mean anything if they don't win Game 7 and score 1 goal or less in the process.

I know that historic stats are not the be all end all of how a game will turn out. But here is a concerning stat.

In retrospect, that's not even all that bad, but concerning nonetheless. The last team to win Game 7 after consecutive losses was Carolina last year against the Oilers in the Finals.
It does happen. It can happen on Monday night.

Check out the poll below from Canucks.com. Vancouver fans are not very confident right now. I am for the most part. I voted "pretty sure."
My prediction in this one is a 3-1 Canucks win. 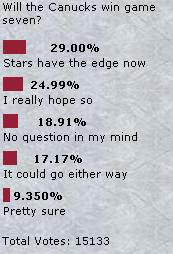