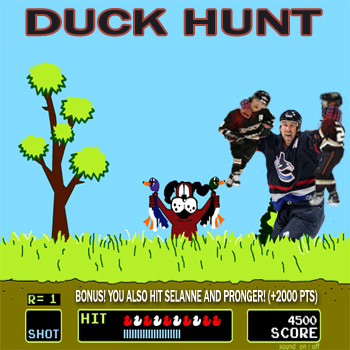 **Update (4:49 PM): Alanah has jumped ship and become a Wings fan! The evidence is here. What's next, locusts? Frog invasion? The river turns to blood? (OK, OK, she just lost a bet. But the sight of her in a Wings jersey is enough to snap Naslund out of a scoring drought. It's the equivalent of John Wayne wearing pink undies, Alan Eagleson working at a bank, etc.) **

"Goaltenders are human, and there's an old saying that you can't stop what you can't see," Ducks coach Randy Carlyle said Thursday. "What we obviously have to do is get traffic, second- and third-chance opportunities, move the puck side to side, get deflections, screens, all of that stuff is part and parcel of attacking."


**Update (3:44 PM): We could be seeing Jannik Hansen back in the lineup tonight. I guess that would mean that Nathan Smith is out.) That is a move I like.**

The Canucks devoted much of Thursday's practice to their power play, which was 0-for-7 in Game 1. Vigneault and his staff debriefed players before the session, analyzing video from Wednesday's game. Defenceman Sami Salo skated on his own for about 20 minutes before practice and briefly during the practice before leaving the ice. **

It's 49 hours since the end of game 1 and I still feel a bit angered and uneasy about the Canucks' 5-1 loss to the Ducks. The media and many fans are placing the lob-sided loss on the absences of Bieksa and Salo and also the fact that the Canucks were emotionally tired and spent after the Game 7 win. Don Cherry called Game 1 in Anaheim a 'no brainer' victory because of the emotional excuse. Pat Quinn said on Hockey Night in Canada tonight that the Canucks 'are not done yet.' (By the way, it was great listening to Quinn's analysis and theories during his guest appearances with Ron and Don.)
Perhaps I am a little more pessimistic. I still see a wasted opportunity after blowing a 1-0 lead, ceasing skating, taking dumb penalties, and not converting on chances.
This isn't the regular season anymore. There is not much room for poor performance, nor should there be excuses made. We are playing a team that is, on paper, in most categories dominant and superior to us. We nearly have to win tonight. We can't go down 2-0 to the Ducks.
It does not appear that Salo and Bieksa will even play in Game 2. (I'll keep you up-to-date on their status today.) So that excuse needs to be thrown out the window. This team has to find a way without those 2.
It is possible. It will take a group of 18 guys playing Alain Vigneault's regimented system to get it done. Vigneault mentioned it today that the Canucks will need to slow the Ducks down and tighten up defensively. It can be done. Vancouver has done it throughout the season against great teams. Hell, we've done it to Anaheim once with Sabourin in net. Vancouver will have to take away Anaheim's speed, and limit them to outside chances, relying on Luongo to stop those shots, and as usual, make some great saves whenever they falter. With all of the skill on the Ducks, the Canucks are still, in my opinion, going to have to score at least 3 goals per game to beat them, barring some Jesus Luongod performance.
Creating more opportunities and shooting more on the powerplay chances is now key.

On most occasions, the Canucks come out hard after a stinker. Expect that tonight. Expect less mistakes and a better structured performance.
3-2 Canucks in OT. The Invisible Morrison bags the winner.