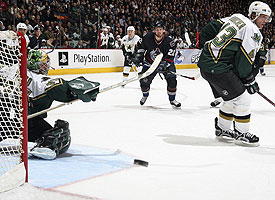 Is it playoff time yet? I feel like going to bed right now and waking up at 4:00 tomorrow afternoon. I just can't wait.
This is my first time covering the playoffs, so I don't know what quite to expect, besides pandemonium!
The Canucks and Stars series is going to be a nail-biting experience. These teams couldn't beat each other by more than 1 goal all year. Every score was 2-1. Each team won 2 games against each other. Both teams relied heavily on their goaltenders because they couldn't score a lot of goals. I guess we can expect the same in Round 1.
But who holds the overall advantage here?

Defensive Depth: Dallas. One of the deepest D-corps in the NHL. Adding Mattias Norstrom at the deadline was solid. The Canucks' D is good as well, just not on paper.

Offensive Depth: Draw.
Are the Habs kicking themselves for acquiring Niinimaa in exchange for Mike 'the Weasel' Ribeiro yet? Ribeiro led the team in scoring with 59 points. That honor would have gone to Brendan Morrow had he not missed half the season. Mike Modano is not what he used to be, thank God.
The Canucks have the same 'problem' of not scoring many goals, but it doesn't matter when you accomplished 105 points, does it?
Canucks goals-for this season: 21st overall
Stars goals-for this season: 22nd

I think there is more pressure on Dallas to win though, especially after the past few seasons of playoff futility. Adding guys like Lindros, Norstrom, Nagy, and Ribeiro is supposed to give the Stars a chance to go deeper into the playoffs.
The Canucks gutted their team last summer and got better results than most people thought possible. The only pressure from them comes from their Northwest Division Championship.

I don't feel like seeing Zubov and Boucher winding up from the point a lot, so it will be key for the Canucks to stay cool and keep their composure, something this team has not done much of in the past decade in the playoffs.
It will be interesting to see if they keep their intensity level high for every game, which is something they didn't do in the regular season.

My Prediction:
A 2-1 Canucks win in game 1. And the Canucks take the series in 6.
Anyone else want to guess the game 1/series result? The race in the sidebar is still on!