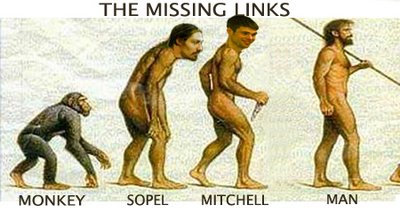 Just as a side note- the Flames-Wings game is a beauty. The game was close until Dan Cleary, the Newfie wonder, scores the first goal on the penalty shot in the 2nd. Then the Flames, like they've been doing all series long on the road, completely unravelled and fell apart at the seams. It's now 2-0 Wings.
Poor Cleary caught an edge by the Wings bench, fell awkwardly head-first into the boards. He's alright.
One thing is for sure: Miikka Kiprusoff is playing super, and his mates are not bailing him out at all.
Great. Chris Chelios scores his first goal of the year. 3-0 Wings. The Flames are fuckt.

Anyways, on to the series that really matters. :)

The post image is something I created about 3 months ago. I always chuckle at how Sopel and Mitchell don't quite look human.
The temporary header on this site is a mockery of the Stars' inability to win a playoff game at home the past couple of years. The count is now 7 straight home losses and I pray to Luongod that great streak continues tonight.
It's time for a gut check from the Canucks, as they couldn't close the series in game 5 at home and the Stars have seized the momentum. It is probably going to come down to a mistake or a deflected shot again tonight, as that momentum hangs by a thread.
I really wouldn't mind seeing Sopel sit tonight in favor of Rory Fitzpatrick. Sopes has looked a little lost out there in this series, where Fitzy was terrific in game 1 and then benched in favor of Sopel in game 2. Do it, Vigneault, you won't regret it.

1-0 Canucks in double OT. Jan Bulis turns hero. Anyone else?
This game is going to stress me out to end like game 5 did. I don't want to be depressed at the end result this time though. No more of that. Kill the damned Stars! I want to see Lindros carried off on a stretcher! I want to see Modano decapitated! I want to see Turco cough the puck up and lose this game! Die Stars die!!!

More Previews on the web:

Take 2- It seems there is a lot of praying going on between JJ at Canucks Hockey Blog and myself!