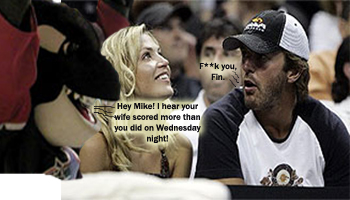 Now that the first marathon is over, can we expect to see another one? Every game in this series could go to overtime the way these 2 teams are matched. So make sure you drink alot of coffee pre game and bring your sleeping bags if you are watching it at a friends' house. It really is possible.
In my opinion, I'd rather not see the wide open style of play from Vancouver. I'd like to see them buckle down and make it a tad more boring. Trap trap trap!
I think they flourish that way.
Hopefully Vancouver can get a lead and hold on to it this time without a 3rd period meltdown.
I'd like to see Luongo play spectacular right out of the gate tonight and frustrate the Stars early, because you know that he is getting inside their heads already, after they peppered him with so many shots last game and still lost.

I wonder how Jansen and Smith are going play tonight in the absence of Cooke and Kesler?
When can we see Josh Green back?

If you are going to the game tonight, WEAR BLUE. It's part of the Believe in Blue Campaign.

3-2 Canucks in double overtime. A lot less wide open style of hockey. The critics begin to call the series boring. And we all tell them to put a sock in it.
Anyone else got a score prediction?

**UPDATE 1**
Burrows wanted to play during the OT in game 1 but his doctor told him to wait until Friday. Burrows could play tonight

."Right now I feel really good," he said. "Some people when they get concussions, they have headaches and stuff like that. I didn't get any of those symptoms. It was just a weird hit, I recovered from the hit and now I'm good to go."


**UPDATE 2**
Brent Sopel missed game 1 not because he was a healthy scratch, but because he hurt his back after trying to pick up a cracker at home. It's true! Hahaha!

"It's the truth," Sopel said. "For some of you guys who think I was a healthy scratch, you think it's all fun and games but ... being keeled over, I couldn't walk. It wasn't fun."