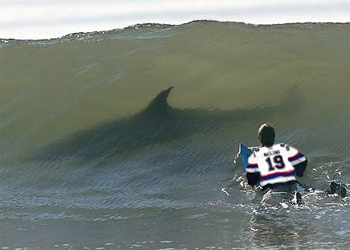 Before I give any personal insight into tomorrow's game, I'll grace you with a few stats.

* Canucks' record against the Sharks this season: 2 wins 1 loss

So what is going to happen on Saturday afternoon? In their last 5 games, Vancouver has allowed 3 goals on 23 times shorthanded. Not bad. They will have to keep that up.
San Jose is going to be another hungry team that we have to face. The Sharks are trying to claim the Pacific Division title from the Ducks. They trail them by 2 points. If San Jose beats Vancouver in regulation and the Ducks lose to the Blue Jackets in regulation tomorrow, the Sharks will take 1st spot because they have won more games.
This time around, unlike the Avalanche, the Sharks will not be watching the Ducks game on the scoreboard while playing the Canucks. The Ducks/Jackets game starts at 4 pm Pacific Time. The Canucks/Sharks tilt begins at 1 pm Pacific Time. Geez, that's too early to start drinking....

My Prediction:
I really didn't like the Canucks' effort last game against the Avalanche. They seemed to cave under Colorado's pressure. Sure, the Nucks usually respond after a dismal game, but I think that the Sharks will be more hungry. I know I sound pessimistic. In the Sharks' last 5 games: Thornton has 7 assists, Cheechoo has 5 goals, Marleau has 2 goals and 3 assists, and Michalek has 2 goals and 2 assists. These guys are rolling.

Anyone else want to guess? Nobody guessed correctly in the Canucks' last game against the Avalanche.

Can Saturday's NHL lineup be any better? The Leafs could clinch a final playoff spot over the Habs if they beat them in regulation, only to possibly lose that spot if the Islanders (who have a game in hand) win both of their games against the Flyers and Devils.
The Wild have to beat the Blues tomorrow to give themselves a chance to catch Vancouver.
The Flames have to defeat the Oilers (or lose in OT or the shootout) to do away with the pesky Avalanche, who will have to defeat the Predators tomorrow. The tension is mounting. I can't wait. It feels like the damned playoffs already!
Enjoy the action, everyone!