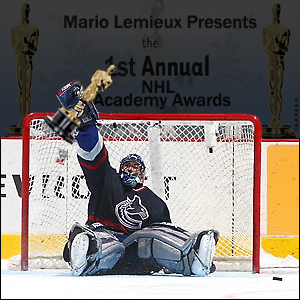 **Update (12:45 PM): Canucks.com is calling out the fans in attendance at GM Place to Believe in Blue, meaning, wear a blue shirt to the game. That would look cool....a sea of blue. Makes sense! :) The article explains how this type of fan support at games has worked for teams in the past.**

**Update (12:35 PM): As Earl Sleek had mentioned yesterday, Brad May is eligible to return to the Ducks' lineup tonight after serving his 3-game sentence for sucker-punching Kim Johnsson in the Ducks' previous series.
That return comes with mixed emotions for a lot of people. Check out Earl's post about that here, and join in on the comment war. It's me against everyone! Woot!**

An update on some injured Canucks' status found at Canada.com:

Defenceman Willie Mitchell and Rory Fitzpatrick didn’t skate Saturday.
Mitchell missed the final 12 minutes of the first period Friday after taking a hip check from Francois Beauchemin. Mitchell did return and finished the game.
Vigneault said he expected Mitchell to play Sunday but Fitzpatrick had the flu.
The Canucks are already without defenceman Kevin Bieksa and Sami Salo, who are out with injuries.
Bieksa skated by himself Saturday but moved like he had eggs in his pockets.
Vigneault doubted Bieksa would be ready, but said Salo would be a game-time decision. The Canucks have called up Yannick Tremblay from the AHL Manitoba Moose.

Well we sure can't really afford to lose any more defencemen. I haven't been overly impressed with Tremblay this year. Hopefully Salo and Fitzpatrick play so we avoid seeing Tremblay out there. This is a lousy time for the flu bug isn't it?

Nonis speaks with the NHL

Dave Nonis and Alain Vigneault are growing tired of the Ducks taking liberties with Roberto Luongo. Apparently Nonis brought it up with NHL authorities on Saturday.

"We’ve got some issues with the officiating that I’m not sharing with you," Canuck coach Alain Vigneault said after practice Saturday. "The professional thing is to deal directly with the NHL. Obviously we had some issues with last night’s game. Dave (Nonis) is bringing it up with them."

Hey, I don't like the shots at Luongo either, however, (rant warning)
Some hits on Luongo are worse than others. Luongo is bent on 'selling it' every time he gets clipped. To me, (and I don't care that he is a Canuck), it's disgraceful to dive like that and lay there like he's been shot. Sure, he's making a point and trying eliminate goaltender interference, but is it really necessary to act like a baby? I don't like it, and I never have liked it. The NHL is becoming like soccer more and more all the time. Unfortunately it goes hand-in-hand with the new strict obstruction rules. If you feel a stick put on you, fall over and sell it, giving your team an advantage. Pathetic.
Christ I'd hate to be a referee nowadays. Not only do you have to call offsides, call penalties, you also have to be an acting critic. (Hence the post image. Not the most positive image but I don't care, I'm annoyed.) Refs don't like divers and I don't blame them. Luongo doesn't have to dive and roll around. He could show a little more integrity. The team could review the cheapshots with the NHL without all the excessive acting skills.
It would be great to see the obstruction calls changed a bit. For example, only call the hooking obstruction if it impedes the skater's progress.
As for the goalie interference, that is a tough one. I'd say that they should be untouchable inside their crease. But once they are outside the paint, the rules change. Full contact! Haha!
Hey, Giguere hasn't been a saint either. He actually skated into a Canucks player and Vancouver was penalized for goaltender interference. It's all about tricking the refs.
Soccer.
Sucks.

Besides that, I look forward to seeing how the Canucks respond after an emotional game 2. Playing at home should help their intensity level, but at the same time, they like to do things the hard way this post season, and could come out a little flat. Hey, they've done that a lot this season.
Regardless, I'll say a 3-2 Canucks win.

Will Naslund continue his offensive output? When is Morrison going to contribute? How about some points from the Sedins? A productive powerplay? For the record, the Ducks have the best PK in the playoffs. It would be nice to put a big dent in that.