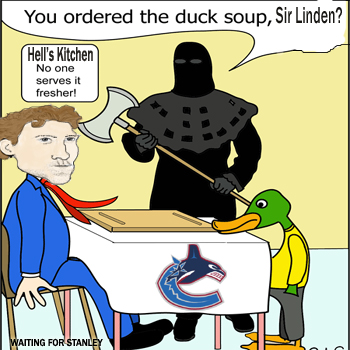 Haha, a little stab at Earl Sleek's cartoon-skills. For me: mostly stolen images and a bit of imagination. Sleek does the real thing, and it's funny as hell.
But let's get down to business.
For the most part, the Canucks-Stars series was quite similar to what happened between those 2 team during the regular season. We don't want that to be the case against the Ducks. Here are some stats for your viewing pleasure.

Breaking down the regular season matchups

This is going to be a tough series for Vancouver. Tougher than the Dallas series I believe. The Ducks blew right by the Wild in 5 games in Round 1, and that was supposed to be a lot closer of a series. So they mean business. Of course, the Canucks could have beat Dallas in 5 had they not shat the bed in Games 5 & 6.
It could very well come down to power plays deciding this series even more-so than the Dallas series. The Canucks will have to avoid needless trips to the sin bin, regardless of the fact that we dominate on the PK and we have Luongo in net. I don't think I can stomach seeing Niedermayer, Pronger and Frenchie Beauchemin cranking shots from the point all that often. And the Canucks really won't get away with that.
It's going to be a rough series as well, with Anaheim perhaps having the size advantage. (Anaheim roster / Canucks roster) Hopefully we match Anaheim's physicality. It wouldn't hurt to get Matt Cooke back either, but his status is still up in the air. I thought the Canucks matched Dallas' physical play really well in Round 1.
It is unfortunate that we still saw that glitch in Vancouver's work ethic in Round 1 that we saw in spurts throughout the season, especially in Games 5&6. I wouldn't mind seeing that disappear really quick. It is going to take the hard-fought effort that we saw in Game 7 at a more consistent level for these guys to advance in the postseason.

Game 1: 4-3 Canucks. The Ducks look sloppy after a week off, and the Nucks, fresh out of Game 7, take advantage of it. Ah, back to seeing more goals scored again...hopefully!

Get ready, because it's:
- the Swedish Touch line or the Sedins-Pyatt Riot line against the Selanne-McDonald-Getzlaf line
- the Canucks' European Twin Towers (Salo and Ohlund) versus the Canadian Allstars (Pronger & Niedermayer)
- Burrows versus Frenchie
- Pahlsson versus Bulis in a PK showdown
- The Almighty Luongod against Marshmellow Man (Giguere) or maybe Bryzgalov.
- Vigneault versus Randy Carlyle, or Archie Bunker
- Nonis versus Burke. The Master meets the Apprentice.
- the Honda Center vs General Motors Place
- the first time these 2 teams have met in the playoffs...ever!

Some Ducks blogs to heckle and spam whenever we win:
Battle of California
Girl With a Puck
Ducks Blog
Anaheim Duck Fan
Or in other words: The Mickey Mouse Club! (I kid, I kid)