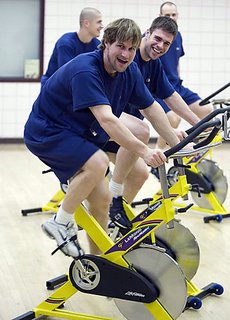 I am loving this time of year! The races for final playoff spots especially in the East, but also in the West between Colorado and Calgary have been a thrill to watch.
Colorado's playoff hopes are hanging by a thread. It could be over for them tonight.
There is no doubt that the Avs will be scoreboard watching, as they are 5 points behind Calgary. The Flames play the Sharks starting at 7:30 pst. The Canucks/Avs game starts at 7:00 pst. A win by the Flames will terminate the Avs' hopes. A win by the Canucks tonight in regulation will terminate the Avs' chances.
Tonight, you would have to think that if the Avalanche players look up and see Calgary beating the Sharks say, 3-1 early in the 3rd, that it will negatively affect their psyche and potentially ruin their momentum and desire. But we'll see.
Odds are stacked against Colorado. Even if the Sharks beat the Flames in regulation tonight, and the Avs beat Vancouver, Calgary plays Edmonton on Saturday, and you know how lousy the Oilers are. A win by Calgary against the Oilers would make Sunday's Flames/Avalanche game nearly pointless. That's no fun....
The Canucks, who still have 3 games left, need the win tonight to clinch top spot in the Northwest. They will get a tremendous boost as Mattias Ohlund returns to the lineup, hopefully to shut down Joe Sakic.
Tonight is Fan Appreciation Night in Vancouver, as they play their next and last 2 games on the road against San Jose and Phoenix.

A bold one. The Sharks will beat the Flames. The Avs are relentless and defeat the Canucks 4-3 in OT, making the race between Calgary and Colorado that much more exciting, and prompting Naslund to give one of his 'We Choked' speeches! Haha, ok, I kid. Ironically, the Avs, who are 8-1-1 in their last 10, have only lost to the Canucks in that span. Does that mean anything?
The Avs have more on the line tonight. Given the Canucks' recent lack of intensity during prolonged sections of games, I think that will be the difference. Colorado is going to come at them hard. I think it will take a massive Luongod effort to stop them.


Anyone else got a prediction?