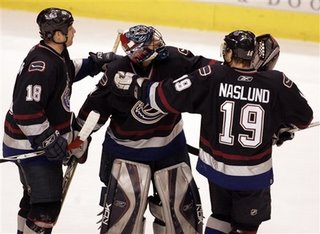 Wait a minute, I thought all of the games in this series were supposed to be 2-1!
Instead, the 2 teams played a more wide open style throught the first 3 periods, the Canucks blew a 4-2 lead in the 3rd, and we had to endure over 3 periods of overtime before Henrik Sedin scored on Turco after a pass in front of the net from his brother Daniel.
This game went so long that I couldn't even drink any more because I didn't want to miss the winner.
Even though the Canucks snuck out a win, they were outshot 76-56. They were being outshot at a 2-1 ratio more than once in this game, but they out-waited Dallas and outshot them 24-18 in the last (almost) 2 periods.
Luongo wasn't great until the overtime periods started.
The Canucks even had to kill off a 2-man disadvantage in the 2nd OT.
This was the 6th longest game in NHL history. I thought it was going to break the record.
The Stars' 76 shots breaks a modern-day record.

1. Roberto Luongo. Preserved the win. Stellar in the OT's.
2. Hank Sedin. Ends this one in the 4th overtime.
3. Sergei Zubov. Holy hell...how many minutes did he play tonight? 48:43, with 1 assist. Only Bieksa (who had better stop being stupid) played more.

It's too bad that this game went so long. This series is going to take it's toll on both teams at this rate. It seems that every game in this series could go into overtime.
The Canucks won a serious mental victory tonight, being outshot like that and still winning. I love it!!
It appears that Vancouver is going to play Vigneault's system all the way through this post season, and that is a good thing.

For the record...Jan Bulis played spectacular. He could have been the best Canuck that didn't score.

And yeah, I'll take Kesler over Santala any day.

I wonder what the status of Cooke and Burrows is? 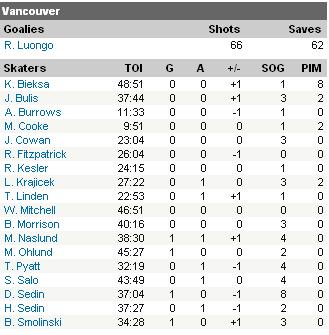