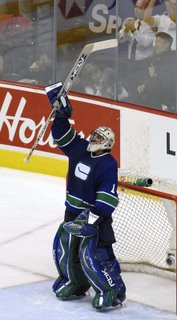 When Joel Lundqvist scored with a beauty wrist shot at 16:32 of the 1st to put the Stars up 1-0, my heart sank, because I knew that Dallas played superb being up a goal. Right after that goal, the Stars went into their defensive mode and the Canucks looked defeated.
But I don't know what Vigneault told these guys in the 1st intermission, because as soon as the puck dropped in the 2nd period, the Canucks were alive, and never really looked back. To compliment their renewed vigor, they received breaks, power plays, and and power play goals of all things. The Stars just couldn't handle the Canuck onslaught and had that look in their eyes that we did in Games 5 and 6. It was a beautiful sight.
Let me just get something out of the way. The refs were atrocious. That was not a way to ref a Game 7 for fuck's sakes. 3:18 into the 2nd period these bastards decided to make 15 calls (most of them lame) for the rest of the game: 5 against Vancouver and 10 against Dallas. I wouldn't blame the Stars fans for feeling a bit ripped. That was the most pathetic Game 7 refereeing that I have ever seen.

Alright. Trevor Linden decided to take it upon himself to turn the clock back about 10 years and take over this game. Linden played over 17 minutes, had 1 goal (including the game-winner) and 1 assist, 4 shots and was a +1. Trevor made a monkey out of me because I didn't think he had another year in him, as I stated at the beginning of the season. Hey, it's good to be wrong!! He now has the most points I believe amongst active players in Game 7's. What a guy.
This game really showed that home ice advantage means something. The Sedins weren't smothered as much because of the line change advantage and played superb. The fans were insane after the dust settled in the 2nd period and I'm sure made a difference. (JJ, did I see you in the stands? I swear I did!)
After the 1st period scare, the Canucks outshot the Stars 26-11 the rest of the way.
As the 3rd period was winding down, you could see the typical Canucks breakdowns in their own zone. But it was a tremendous save by Luongod and a crossbar that saved our asses before we scored 2 empty net goals. The rest is a blur. The booze flowed freely in celebration. We drove around town wearing Canucks jerseys screaming and cheering, and some dickhead at the bar wanted to tangle with me because he just wasn't having as much fun. Hey, fuck him. The Canucks won, and now we play the Godforsaken Ducks. It's on, Sleeeeeeeeeek!!! I see Earl is already starting a goalie controversy at his site. Poor guy needs to be converted to the Luongod faith ASAP. It's going to be good times Sleek. I look forward to it!

I'll have more post game reactions tomorrow. Until then, hope you got up for work today feeling somewhat sober and for sure feeling that is was all worth it! 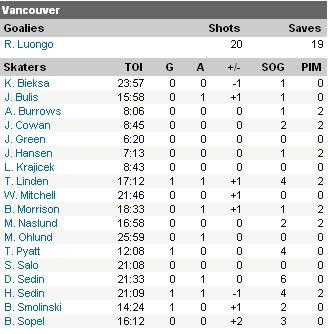