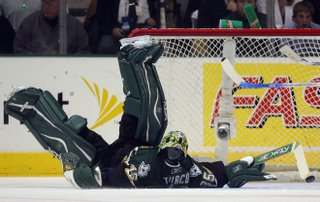 The Stars and their fans are leaving the arena disappointed again tonight as the Canucks have squeezed out another narrow victory to go up 3-1 in the series. For the first 50 minutes of this game:
-both teams put up a defensive clinic. Most of the shots came from the outside.
-the shots were pretty even.
-Both teams took numerous amounts of penalties, some justified some not. The PP futility of both teams continued tonight. Vancouver was 0-for-5. Dallas was 0-for-6. A lot of that still has to do with each teams' brilliant PK.
-Marty Turco stoned Trevor Linden.

Then the mini game started half-way through the 3rd. It started to open up a little. At 9:46 Mattias Ohlund blew a slapshot over a sprawling Turco. Alright! The Canucks were going to win this one, right?
Not quite. 3 minutes later, Naslund coughs the puck up with a half-assed clearing attempt, right onto the stick of Nagy, who slides it over to Sydor. Bingo bango bongo-check out the size of the 5-hole on Luongo. 1-1.
Exactly 2 minutes later, the rugged, aging, fearless Trevor Linden puts the Canucks back on top with a beauty shot.
Another shot goes through Luongo's gaping 5-hole soon afterwards, but this time Willie Mitchell swats the puck off the goal line! Did Luongo's brain fart or what?
The Canucks kept their composure and finished off the Stars afterwards. Marc Crawford's version of the Canucks would have choked. Not these guys. What composure!
Dallas has lost 6 straight home games in the playoffs. I think their fans are developing a complex. I'm developing a joyous drinking habit!

I was stuck at work for this one, waiting for our mill to start up, but thankfully, CBC was streaming the game. Only thing was: it was streaming about 30 seconds slower than it was on TV, so when the Canucks scored my friends were calling me here about the goal and it hadn't happened on CBC's stream yet! I told them to wait 30 seconds before calling me!

It was great to hang out online with Mike at the Yankee Canuck, who was live-blogging the game. 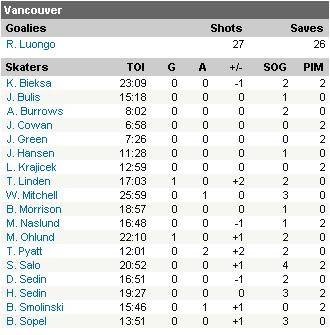