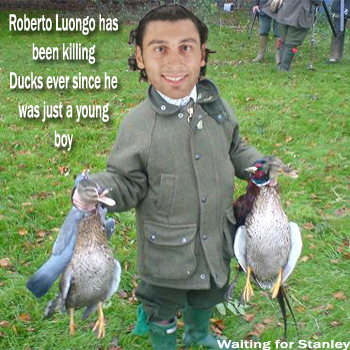 What a contrast from Game 1! The Canucks sustained pressure on the Ducks tonight for a lot longer than they did in the first game. The much-maligned Markus Naslund scored a Crosby-like goal on Giguere after stripping the puck from gap-toothed Pronger at 6:30 of the 2nd period, finally giving the Canucks something on the scoreboard to reward them for their efforts.
About 5 minutes later the Nucks got caught, and Selanne charged in alone on Luongo, who stoned him. Unfortunately, Travis Moen cleaned up the garbage and scored on the rebound because no one took him out. That was a deflating goal to say the least. It seemed from that point all the way until the 2nd OT, the Ducks had better chances and more momentum. The Canucks hung in there and got some breaks, like the shot off the post moments after the Moen goal.
From the 3rd period on, the Canucks took 4 penalties to the Ducks' 1. That didn't help the momentum factor at all. A lot of these calls were fucking LAME. The refereeing is getting shitty beyond all comparison in these playoffs, and these goddamned refs are beginning to dictate game outcomes with their bogus calls, regardless of the fact that neither team scored on the PP tonight. You could see the same shite in the NYR-Sabres game tonight. Just ask Lindy Ruff.
How about Jeff Cowan's winner? What a squeaker through Giguere to win it. Is bra power back? Ladies, do your thing on Sunday night if Jeff scores again, regardless of the fact that it's the Lord's Day!
Trevor Linden continued his strong play tonight and did the dirty work on Cowan's goal. He also made a no-look pass to set him up! Yeah, Trevor fricking Linden. What a great feel-good moment.
Jannik Hansen should stay in this lineup from now on. He was a force out there, and clicks well with Jan Bulis, who was also top 3 best Canuck out there.
This is the style of play that it will take to beat the Ducks in this series. Besides Selanne's breakaway, did you see a lot of speed from the Selanne-McDonald-Kunitz line? I thought they were shut down well, as well as the rest of the team. 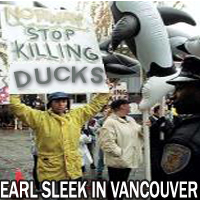 Most of their chances were from the outside, which is the way we like it. No doubt, the Ducks did the same thing to us as well.
The Ducks were mostly dominant on the PP but failed to convert. The Canucks looked improved on theirs but could not capitalize either.

I am very curious of how many turnovers there were tonight. Jeezus.

It's a new series. I think we saw a glimpse tonight of how this series is going to play out: not a lot of stellar chances, but a lot of shots regardless, not as wide open, lots of powerplays, and solid goaltending, obviously.

See? We don't necessarily need Bieksa and Salo. When this team plays cohesively as a unit, they can go toe-to-toe with any team out there.

I hope Mitchell shakes off his injury and is available for Game 3. He is proving that he is worth every bit of his $4 million contract.

The Canucks are now 3-1 on OT in these playoffs. Can you say magic???

Buckle up, this series could go the distance.

1. Roberto Luongo. Ah, finally a win over the Ducks. Those consecutive stops on the Ducks' PP in the 2nd period saved Vancouver. Luongo was steady. Now if only he'd go to a Marty Turco puck-handling school in the summer.
2. Jeff Cowan the Brabarian. A hard fought game and a deserving guy to bag the winner.
3. Jan Bulis. Janny B really was everywhere. He played over 24 minutes tonight especially because of all the times the Nucks were shorthanded and performed admirably. Great game, Jan. You are way out of my bad books now. 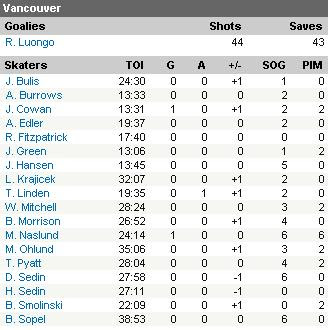