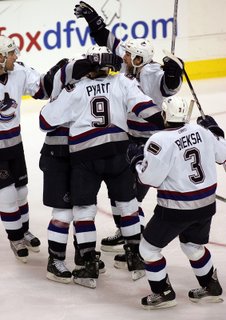 You know, this isn't going to cut it. The Stars are back to their usual tricks, shutting the Canucks down, keeping everything to the outside and out-muscling them. Luongo had to be much better than Turco in the first and the second period seems to be about the same. I got a bad feeling. The Canucks are not playing desperate either.

Sure enough, the Stars continued their dominance in the second frame, and were rewarded by a Stu Barnes deflection.
As soon as that happened, we finally started seeing some desperation from Vancouver.
How many penalties is Bieksa going to take before I drive down to Dallas and and kick him in hte damned teeth? Fuck!
You get the feeling that the first team that scores in this series wins every game.
Roberto Luongo has been unbelievable. Those saves in the second period were phenomenal.

And those saves were game-saving because the Bulis-Hansen connection has struck again! What a great rebound goal.
The Canucks are showing way more hustle now. They have adjusted to Turco as well. Their shoot-ins are away from Turco so he can't play the puck. Also, the Nucks are getting pucks on net. The shots are along the ice so that Turco lets out rebounds. This could bode well for us in OT.
Oh God, is this going to be another marathon?

Nope! No marathon here! The Canucks keep the pressure on in OT, and Taylor Pyatt rifles a shot past Turco at 7:47. Linden and Smolinski get the assist on the game-winner. Right..the Linden-Smoke-Pyatt-Riot Line, who I thought were mostly invisible tonight.
Hey, we'll take it. I don't give a fuck who scores as long as we win!
What a turnaround by Vancouver.

Pyatt gets the 3rd star because of his winning goal, but it really could have been Jannik Hansen, who was the best Canuck tonight. Bulis was a close second. Yeah, Jan fucking Bulis.

After Pyatt scored the winner, myself and my friends were jumping up and down, and Milo, the Jack Russel Terrier in the room jumped up and bit me in the stomach while I was celebrating. I kid you not. The little fucker left a mark on my guts! So during the celebration I grabbed the dog by his fur and was scolding him. Guess you had to be there. 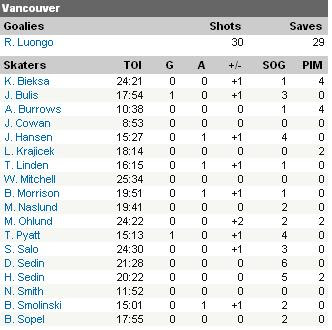