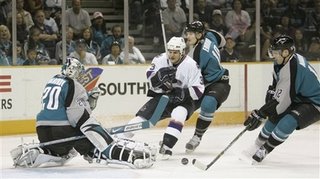 May as well semi-live blog this, as I won't have time (or the wits) to do it later.

After 1
The Canucks weathered a brief Shark attack at the beginning of the 1st and then completely took over, getting goals from Matt Cooke and Taylor Pyatt. Wow. They are moving the puck around fast tonight. The Sharks are trying to muscle the Nucks around, but it's not working.
Cooke looks terrific tonight.
Was that Santala beating up on Thornton during that scrum? The Sharks seemed to wake up after that.

After 2
Yeah, the Sharks are alive, and the Canucks are taking too many damned penalties! They took 4 penalties to San Jose's 1. Michalek and Thornton made them pay. I'm not going to sit here and bash every call made against them, because Vancouver has to stop putting their stick on the players like that. But Luongo's delay of game call was utter bullshit! What the fuck else was he supposed to do there? Play the puck? Where to? He was way out of his net.
Cooke calls the Luongo call stupid in the 2nd intermission because a Shark player was right there. EXACTLY!
2-2. A wild 3rd period coming up! If the Nucks stay out of the box, I think they might win this one!
Shots on goal so far: Sharks 23 Canucks 22.
Matt Cooke is a damned force out there.
The Canucks are getting beat up physically, as the Sharks hit them every chance they get.

FINAL
The Canucks have done it! Mattias Ohlund shot the puck from the point in OT on the powerplay, and the puck went off a Shark defendors's stick and fluttered into the net
What a crazy finish to a crazy game.
In the 3rd, Kevin Bieksa, the true Shark killer blew a shot past Nabokov on the powerplay to make it 3-2. The Canucks went into their defensive mode. Luongod made a miraculous save in the last 10 minutes that will be shown on highlight reels everywhere for a long time.
What a physical game! The ultimate physicality came from Joe Thornton, who completely annihilated Matt Cooke into the boards, taking a boarding penalty. It looked like Joe caught the edge of the boards with his snout, as he bled profusely. Couldn't have happened to a bigger piece a crap! Joe was a man possessed all night. He looked cranky as hell!
But an unfortunate bounce in front of the net during a frantic Shark scramble gave Cheechoo the chance to tie the game with only 30 seconds left. Yes, Thornton returned to the ice after getting his schnoz looked at and put the puck in front of the net to start the play.
The Canucks were not to be denied tonight. And ironically, it was Joe Thornton who took the penalty on Sedin in OT that gave the Canucks the man advantage they needed to finish off San Jose and ruin their Pacific Division-winning hopes. Haha. Sweet revenge for San Jose eliminating the Canucks from a playoff seed last year.
Shots on goal: 30-30

Loving it Earl?
The Northwest Division is ours! The Canucks play Dallas in the first round. I don't mind that. I hear Lindros is returning.... 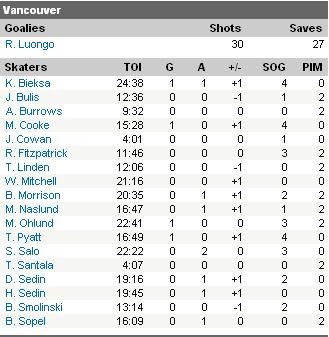 *****WHOA! Mike from the Yankee Canuck called the correct score, including the OT! Nice work!! And sorry for the delayed response!*****