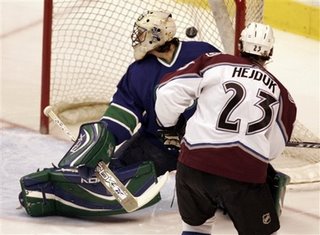 Due to the magnitude of this game in the positioning of both teams, I am going to live blog it period-to-period. Since tomorrow is a stat holiday (thank you Jesus, literally) I plan on excessively consuming Captain Morgan's Spiced Rum and Coke. I may as well blog while I can remember something still! Feel free to hang out during the game if you wish.
---From the East---
6:32 PM - doesn't Montreal or Toronto want to make the playoffs? Both teams are losing in the 3rd period. Jeeziz!

7:59 PM- Milan Hejduk, the Canuck killer scored early and put fear in our minds in the first minute. Naslund had a goal disallowed because he directed the puck into the net with a kicking motion. Fair enough. Less than a minute later, Sami Salo wrists a shot to the net and Morrison deflects it in. 1-1!
The Canucks settled down quickly after the Hejduk goal and owned the play, even though they didn't generate a lot of scoring chances. I'm loving their dump-ins and forecheck tonight.

8:36- The Avalanche respond in the 2nd period, basically doing what the Canucks did to them in the 1st. A big difference is that the Nucks took 3 penalties in the the 2nd, (2 by Bieksa). Louongod was the difference in that frame, making 3 spectacular saves, especially the point-blank stop on Hejduk in close.
This is turning into a chess match. The first team to fuck up loses.
Noticeable: Naslund is playing really well tonight. He is showing hustle and grit, and is back checking really well. Yeah, Nazzy the defensive specialist!
-the same can be said about Jan Bulis. I am loving the Bulis-Burrows PK combo.
- nothing doing in the Flames-Sharks game after 1. Are you losing your minds yet, Tapeleg and B_Washington?

9:16 PM- Wow. Hejduk 3 Canucks 1. Budaj stops D Sedin on a breakaway and the tide of the game turns. Hejduk has bagged 2 in a row in the 3rd. The Canucks have no reason to even win this one, as the Avs are out-chancing them 2-1. Poor Luongod is getting no support.
Sharks 2 Flames 1. Do you think the Avs are seeing that?? Of course they are!
Fuck! Budaj stops Dank on a breakaway again!! Nuts.

End of 3rd
So there you have it. Hejduk has an amazing game with 3 goals, Paul Stastny has 3 assists, and the Avalanche win a game that they deserved to win, ruining the Canucks' Fan Appreciation Night. Most of the fans went home.
Now, will the Sharks save the Avs???

Update: The Sharks are winning 3-1 in the 3rd. Could the night go any better for the Avs??? Nope.