Share All sharing options for: Brodeur Beats Luongo to Record 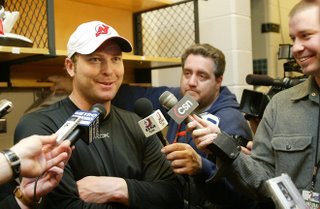 Due to the Canucks' lack of desire to win last night, poor Roberto Luongo didn't even tie Bernie Parent's 33-year-old record for single-season wins (47) last night. Instead, Martin Brodeur backstopped the Devils to a 3-2 win over Philly last night and surpassed Parent's feat. Brodeur had good things to say about Luongo in his post-game interview:

"If goalies are able to play a lot, they'll get close to it every single year," Brodeur said. "Luongo's in his prime right now and if he doesn't do it this year, it's going to happen. ... I think it's the bulk of the games. If somebody's able to stay healthy and stay successful on a top team, they'll probably be able to challenge that record."

That is little consolation to Luongo right now I'm sure. Brodeur would need to lose his last game against the Islanders on Sunday, and Luongo and the Canucks would have to win their last 2 against San Jose and Phoenix in order for Luongo to tie Brodeur and not feel like second best.
And in my opinion, that may have been a large part of the disappointment that showed on Roberto's face last night after the loss and during Canucks' Fan Appreciation Night. Luongo played his heart out against the Avs only to have his teammates NOT bail him out. Depressing stuff, isn't it?
This guy wasn't very happy either.

Perhaps the Canucks' Awards cheered him up a little.