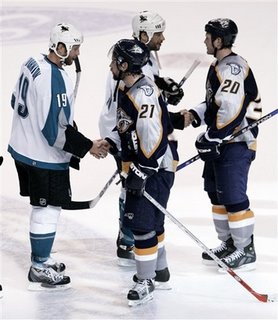 It was deja-vu for the Predators as the Sharks beat them in 5 games in round 1....again.

I am sure that the absence of the oft-injured Steve Sullivan didn't help. Sullivan had 60 points in 57 games in the regular season , but did not play a game in the playoffs.
The Preds looked completely undisciplined as well. Alex Radulov looked like he was going to become a star in this series, only to receive a 1-game suspension on his hit on Steve Bernier. His hot streak dried up during his day off.

Was it worth it signing Forsberg? I think now that is was questionable, especially considering the fact they gave up Scott Nichol Scottie Upshall, excuse the brain fart, prospect Ryan Parent, and 1st and 3rd round selections in the 2007 Entry Draft. I guess at some point in time a team is ready to make a push for Lord Stanley and have to make a move like that. The gamble did not pay off. Peter had 2 goals, 2 assists and 7 shots on goal in the 5-game series. He just doesn't have the wheels and the aggression that he used to have to really be a force that the Predators needed him to be. Ironically, Peter lost his composure with Craig Rivet with only 30 seconds left in the game and sat in the box when his team needed him the most.

Scott Nichol is a jackass

And that was typical of the Preds' undisciplined play. When Nashville had a 2-1 lead and momentum in the 2nd period, Scott Nichol took a bone-headed spearing penalty and received a 5-minute major for it. About 3 minutes later Patrick Marleau tied the game and the Sharks never looked back. In a series where the games are so close, that kind of behaviour is unacceptable.
So what does the Predators' organization do now?