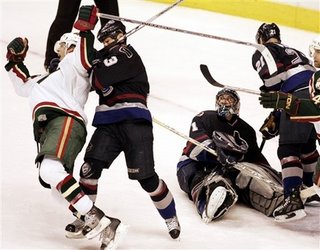 This was going to turn into a route. It almost did, with the Canucks up 2-0 after 1 and outshooting the Wild 10-5 in the 1st period. Strangely enough, the Canucks got flukey goals from 2 players who have not scored much recently: Jan Bulis and Matt Cooke. Jeff Cowan turned into a playmaker with 2 assists! Ah yes, it was going so well.
Then the Wild came out strong in the 2nd period and took over the game. The Canucks spent the majority of the 2nd and 3rd periods trying to hold off the Wild attack. Mikko Koivu made it 2-1 in the 2nd after a broken play defensively, as Keith Carney pressed behind the Canucks net and put a sweet backhand pass onto the stick of Koivu, who roofed it. Keith 'the playmaker' Carney. Where was this last year, Keith?
In the 3rd, the Wild came out strong again and the Canucks sat back trying to protect the one-goal lead. It almost worked. But with only 4:24 left in the game, Brian Rolston stormed over the blueline and blew a shot past Luongo along the ice (where Don Cherry likes them to be.) What a bullet.

"It's not a matter of picking corners on that one, I just put my head down and shot it," said Rolston, who skated over the blue line at full speed after a neutral zone turnover, then blasted the puck under Luongo.

"I feel I can score from inside the blue line if I get it right, but usually you're not going to score on a straight look like that," he said. "It looked like he was coming out to challenge and just didn't get down in time."


The Canucks looked better in OT, 4-on-4, but it was weak coverage by Ohlund on Gaborik, who blew by Mattias and put a shot on goal, followed by Brent Burns burying the rebound that sealed the deal.

Keys to the game:- The Canucks needed to bury the Wild when they were up 2-0. They were holding the Wild at bay, but were generating no offence, except maybe guys like Bulis and Cowan, who were the best offensively...yeah....sad isn't it?
-So where the hell were the Sedins tonight? They were being smothered and knocked on their asses all night, and were ineffective. Textbook coverage by Minnesota.
-The Canucks were lame on the powerplay all night. Period.
-The Canucks were outhustled again tonight. Can they even keep up with these guys at all? Hope we don't meet them in the first round.
-Nathan Smith looked like..well..a fourth liner tonight. But he showed hustle.
-Didn't the Canucks' defensive breakdowns on the Koivu and Burns goals remind you of the Canucks of last year? Crawford lives!

Who picks the 3 stars? And is that person on crack? Ohlund was NOT the first star, or the 10th star.

1. Brent Burns. The game winner to make amends for the puck going off his skate on the Nucks' 2nd goal.
2. Marion Gaborik. Could not be contained enough.
3. Jeff Cowan the Bra-barian. Lots of hustle again. 2 assists.
4. Christina Aguilera. Was at the game tonight since she is in town for her concert Monday night. Bad luck charm? Or just plain dirty?

At least I picked the score right..just the wrong team. And then I lost 2 games of poker. Luongod dammit!
At least we got 1 point. 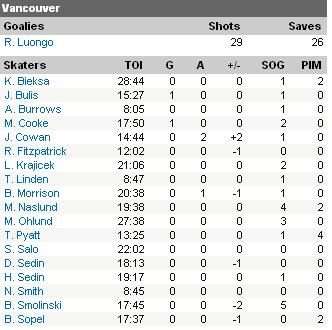