The Whiner and the Diver

Share All sharing options for: The Whiner and the Diver 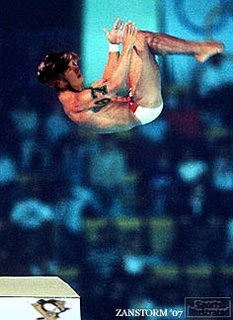 A great yet pathetic story out of Ottawa today: Senators coach Bryan Murray yesterday accused Pittsburgh Penguins superstar centre and NHL poster boy Sidney Crosby of swearing at him during the first period of Ottawa's 4-3 shootout loss on Sunday.
Murray said that's conduct unbecoming of an NHL superstar.
"He's one of those young people, and rightly so, that the league is really promoting as the example of the new NHL," said Murray. "When he turns, and I'm sure he's on camera quite often, using the language he does, I don't think that's something he should do. That's all."
Crosby was reacting because Murray had told referee Don Koharski that the young star took a dive in what resulted in an interference call on Mike Comrie in the first period.
Pittsburgh coach Michel Therrien got into a shouting match with Murray and accused him after the game of "talking to my players."

"(Therrien) should be careful who he says things about," said Murray. "I was yelling at Don Koharski. Mike Comrie put his stick on Crosby and we know full well he's one of the more powerful skaters in the league.

"I thought it was a very incidental call and Crosby kind of dressed it up a little bit. --------------
Alright, alright. First of all, Murray is a tad hypocritical, as this video shows.

Secondly, Crosby is always going to be a diver until the League puts an end to diving, which I would imagine they won't. They could curb it a little more often by calling more diving penalties. But hey, I imagine it's tough enough to be a ref as it is.

I can understand Murray's frustration, but his method of attack on Crosby's language problem is laughable.