Share All sharing options for: Status of Josh Green/Kesler 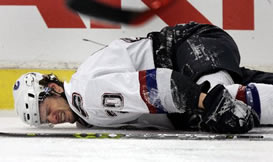 Josh Green has posted at the Canucks.com player's blog about his status and when he could return. He is targeting the last game of the season or the first game of the playoffs. I won't mind seeing Green come back, as he is a gritty role player AND it will eliminate Tommi Santala from the Canucks' roster. That's a no-brainer.
But what about the return of Ryan Kesler? Barring any injury, and that Green has returned already, who would Kesler knock out of the lineup? Jeff Cowan? Josh Green?
It may be a hard choice to make unless:

At Kesler's $1.9 million salary, you'd have to think he'll be inserted back in to the lineup as soon as he is ready. But besides Santala, I am liking this team the way it is. I don't even miss Kesler. Sorry Kes.

So I am conflicted. What are your thoughts? When Kesler and Green have clean bills of health, how would you adjust the lineup? Would it mess up the chemistry? Would it depend on how the Canucks are playing in round 1?