Share All sharing options for: Speaking of Ultimate Canucks fans... 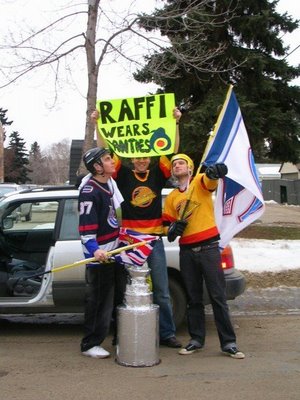 Two Canucks fans from Victoria bought 5 tickets to the Canucks/Oilers game at Rexall Place on Monday night, and flew to Edmonton to watch the game there with some friends. Mcecill, one of the 2 guys, has posted the story at the Canucks.com Forum. It is a great read. These guys are nuts: pissing off/hiding from Rexall Place security, being mocked, playing with the Wayne Gretzky statue after the game, etc. I got a good laugh out of it. There are a few more pictures of their experience at the CC thread as well.

(Thanks to Temujin for the heads up)