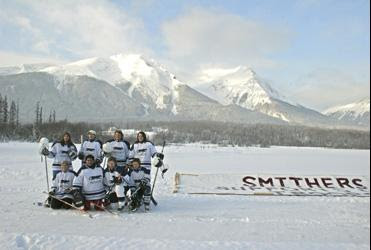 Why should my hometown of Smithers BC be Hockeyville? Our website nearly says it all:
1. For a town of only 5,000, we’ve produced nine NHL players.
2. We play hockey surrounded by the most beautiful scenery on earth, yet still prefer the inside of our arena (a converted 50-year-old aircraft hanger).
3. Two words: Watson Bros.
4. We hosted the world’s highest elevation women’s hockey game.
5. We’re home to Canada’s best outdoor rink (pictured below), according to Hockey Night in Canada
6. We have real winters and can skate outside seven months of the year
7. Getting a front row seat at the Oscars is easier than getting ice time in our arena.
8. Our passion for a game is reflected in our town’s passion for community spirit and support.
9. We’re home to hockey players 4 years old and 70 years old (in Smithers you start playing in diapers and finish playing wearing diapers).
10. Even Canada Post recognizes Smithers as Hockeyville (Want proof?).

My opinion
From what I saw last year, CBC did not release the 2nd or 3rd place results. Smithers was either one of the 2. We are eager to win the title of Hockeyville this year and I feel we deserve it.
Being raised here has been a blessing. I grew up living along Lake Kathlyn, near the far shore of the lake shown in the picture above. Every winter, someone would clear off the snow from the ice and make a hockey rink. There would be a public rink at the beach area, as well as private rinks made by people who live along the lake's shores.
If we were lucky, November would provide -15 to -25 degree celsius weather with no snow, freezing the lake into one giant rink. Ever chase a puck for 100 feet or more after shooting the puck wide of the net?? That's how it was.
And it was and still is a community thing. Just lace on your skates, bring a hockey stick, and jump into the game on the fly. People here don't mind.
And this is just Lake Kathlyn. The same applies to other 3 or more lakes around Smithers and Telkwa.

MORE ABOUT SMITHERS AND HOCKEY
-We now also have 2 public outdoor rinks in town with boards around them. It is often busy there at both of them.
-Besides the Watson Brothers, who won 2 Cups with the Flyers, Smithers has provided 7 other NHL'ers, including Dan Hamhuis.
-For a taste of our community and the beauty of the Smithers area, check out our clip.

-Smithers is in the Top 5 again this year! We are not giving up! Please vote for us to become Hockeyville! 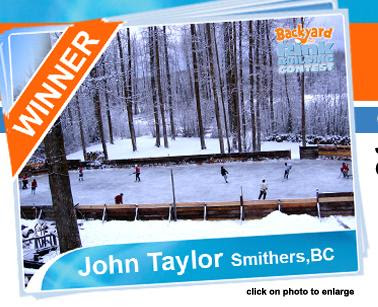