Simon says: "I get a 25 game suspension"

Share All sharing options for: Simon says: "I get a 25 game suspension" 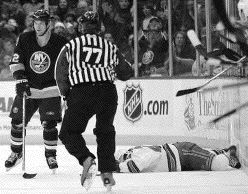 The NHL hit back hard Sunday, suspending the rugged Islanders forward for a league-record 25 games. Simon will miss the rest of the regular season and playoffs as punishment for his two-handed stick attack to the face of Ryan Hollweg of the New York Rangers in a 2-1 loss Thursday night.

It really doesn't pay to be a repeat offender. This is the 6th time that Simon has been suspended. 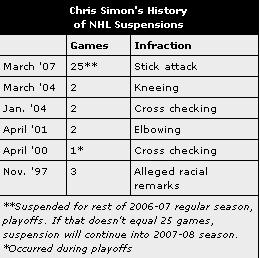 "I want to apologize to my team and Islanders fans everywhere," Simon said in a statement released Saturday night during the first game of the suspension. "My actions Thursday night played a major part in our team losing a crucial game. I also want to apologize to the National Hockey League for the damage I have caused this great game of ours."


The Islanders will miss Simon's grit, and his role as a depth player. He had 10 goals and 27 points this season, but ironically, only 75 penalty minutes in those 67 games. That is on pace for his lowest PIM's per game in his career.
Well, it was a momentary lapse of reason for Simon. I don't hold it against him at all. His temper got the better of him this time. I'm sure he's a good guy. I've alway been a fan of him, and liked his play. Hopefully he gets to play at least one more season to perhaps redeem himself somewhat.