Sid the Kid and Gary the Scary

Share All sharing options for: Sid the Kid and Gary the Scary 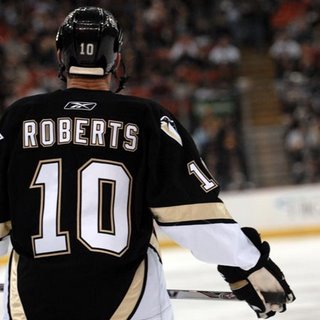 Gary the Scary meaning: Scary good! So let's just shift the spotlight off of Crosby for a second. Gary Roberts and his new linemates Erik Christensen and Michel Ouellet were dominant in the Pens come-from-behind victory over the Flyers today. Sure, Crosby buried the shootout clincher, and played a good game, generating alot of chances. But he was held off the scoresheet in the first 4 periods.
It seems as though coach Michel Therrien has found a great line with Roberts, Christensen, and Ouellet. Roberts had 1 goal and 2 assists, Christensen had 2 goals, and also scored the winning goal in the shootout, and Ouellet had one assist. A combined 6 points on the Pens' 3 goals in regulation.
Roberts was a physical force out there. His physical play drew penalties, opened up the ice, and created scoring opportunities. He's still playing like he's 30 years old! Unreal. He is of Chris Chelios-mold for durability.
Roberts is one of the key ingredients, second to Crosby and Marc-Andre Fleury of course, of the Penguin's playoff hopes. What I saw in that game today was:
1. Fleury started off shakey, allowing that floating bouncer, and then completely settled down, playing terrific after that.
2. The kids on the Pens squad are gifted and love to press hard for offence. But their defensive game needs work. The Flyers had alot of odd-man rushes.
3. The forwards won't dump the puck in. They prefer to carry the puck into the opposing zone and use skilled plays. The line that dumped the puck in and forechecked was the Roberts line, and it paid off.
4. Evgeni Malkin was invisible for the first 2 and a half periods, and barely came around in the 2nd half of the 3rd period.
5. What a wise move by Fred Shero to acquire Roberts and Georges Laracque at the deadline. Their experience is helping the young Pens. But the Pens may not be ready to go deep into the playoffs yet. They will need to mature very quickly for that to happen. Of course, Gary Roberts looks like he's about ready to win a playoff series all by himself!

As for the Flyers, they are on the right path. Acquiring Martin Biron was a good move, as brings character and skill. Scottie Upshall looks good out there. Philly, within one season, have overhauled their lineup and have done a hell of a job doing so. This team looks good already!